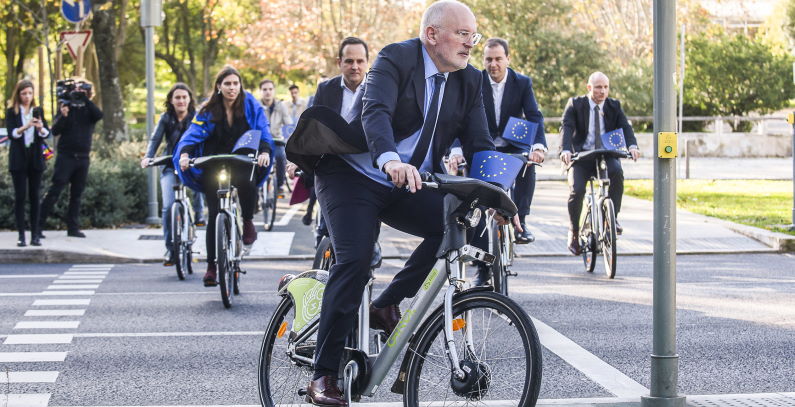 EU lawmakers and cycling organizations pressed European Parliament President David Sassoli and Secretary-General Klaus Welle to make more room for pedestrians and cyclists and encourage MEPs and employees to avoid using cars for commuting. European capitals and countries are continuing to support bicycle traffic and infrastructure, one of the activities that may also limit the spread of the coronavirus.

European institutions should lead by example in the field of sustainable and safe active mobility and bicycle infrastructure, the EU Cycling Group and 51 members of the European Parliament said in a letter to European Parliament President David Sassoli and Secretary-General Klaus Welle. Citing the European Green Deal, they urged them to prioritise walking and cycling in the mobility schemes for the European Quarter in Brussels, but also in Strasbourg and Luxembourg, the institution’s two other seats.

“During peak hours, the European Quarter is a collection of car jams, crowded subway wagons and stuck buses. The new reality of living with COVID-19 turns this mobility scheme into a serious public health hazard,” the European Cyclists Federation said. It backed the initiative and demanded further action to support commuting to work by bicycle.

Signatories praised some of the European Parliament’s initiatives and this year’s mobility plan GoodMove for the Brussels region. It won the European Commission’s Award for Sustainable Urban Mobility Planning (SUMP).

The lawmakers supported the demand for more space for pedestrians and cyclists and bicycle parking infrastructure.

How to curb personal car usage

Campaigners have been pointing to the trend of increased personal car usage instead of public transportation due to fears of infection. They are warning the system must be adapted to provide more safety in cycling and walking and encourage commuters to leave motor vehicles behind.

Data gathered before the pandemic showed 60% of trips in France and 46% in the United States are under five kilometres. A stunning three fifths of short journeys in England are made by car.

A recent paper by Rachel Aldred from Westminster University revealed “rapid changes to road layouts” and other measures would enable “up to half of all public transport journeys” in the United Kingdom to be made by bike or on foot.

The speed limit in the City of London, the financial district in the UK’s capital, may be lowered to 15 miles or 24 kilometers per hour. The authorities are planning to introduce 1,900 cycle parking spaces at the expense of car parking.

Back in the EU, Paris Mayor Anne Hidalgo won her second six-year term on the wings of her people-friendly city policy and the promise to tackle climate change and air pollution. She announced measures for “a Paris that can breathe” where all streets and bridges under her jurisdiction would get a cycle path.

Every street in the French capital will get a bicycle lane, according to Mayor Anne Hidalgo

At the same time, most parking spaces on the streets would be abolished, according to the program.

Ireland’s Minister for Climate Action, Communications Networks and Transport Eamon Ryan, who used to run a bike shop, said one fifth of the country’s transportation budget or EUR 360 million per year would be spent on solutions for walking and cycling.

The leader of the Green Party, which last month formed the government with larger rivals Fine Gael and Fianna Fáil, added two thirds of the remainder would go to public transit.