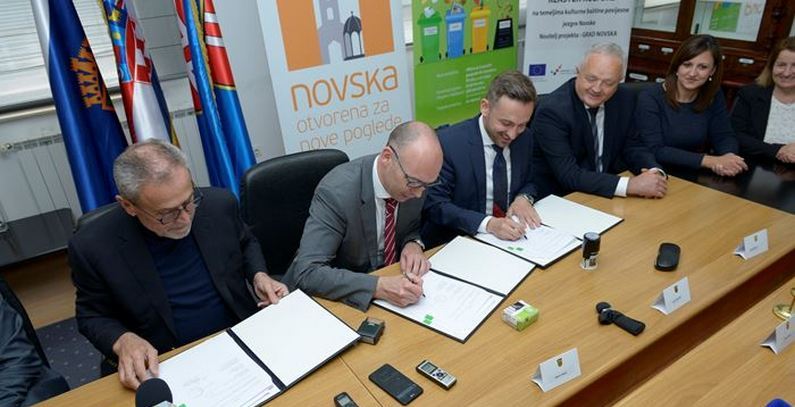 The cities of Zagreb and Novska and the Zagreb waste management center have signed an agreement on the construction of a facility for the treatment of separately collected biowaste. The waste will be transported from Zagreb to Novska, in whose business zone the EUR 50 million facility will be built.

Complete documentation, including the building permit, should be secured over the next two years, and a public call for plant construction could be launched in 2021, the City of Zagreb said on its website.

The study will determine what kind of technology will be applied, or whether a composting or biogas facility will be built.

The agreement envisages the preparation of project documentation which should cost HRK 4.5 million.

The agreement on cooperation in the preparation and construction of the facility was signed by the mayors of Novska and Zagreb, Marin Piletić and Milan Bandić, respectively, as well as the director of the Zagreb Waste Management Center, Igor Zgomba.

Zgomba recalled that Croatia has accepted new rules by joining the EU and has adopted the Waste Management Plan, which envisages the the obligation to separate 40% of biowaste from the mixed municipal waste, and to treat it.

After Daruvar, Koprivnica, Varaždin, Križevci and other cities that have already built such facilities or are in the process of construction, Novska decided to propose to the City of Zagreb to start building a joint facility, in a business zone which spans 85 hectares, Piletić said.

He noted that Novska is an agricultural region, adding that the production of compost and biogas in the planned facility could help the city emerge on the energy map of Croatia.

Piletić said that the facility should create at least 40 jobs.

Zagreb Mayor Milan Bandić is convinced that the decision to build this facility will be copied by other cities that haven’t done something similar, as well as the Zagreb County, as there is enough room in the Novska business zone to expand the project.

In mid-January, the Ministry of Environmental Protection and Energy announced the distribution of a total of 1.2 million waste sorting bins for biodegradable waste and recyclable municipal waste in 407 municipalities and cities in Croatia.