Convening on best practices in energy efficiency in SEE countries 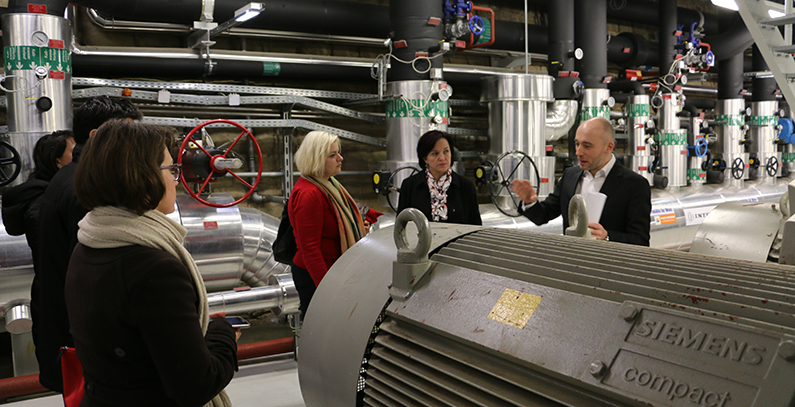 Local Government Associations (LGA) of Albania, Bosnia and Herzegovina, Serbia, Montenegro, Kosovo and Macedonia, as members of the Task Force, used the opportunity to share and promote best practices and experiences made during the implementation of the EeMA project. Special accent during the meeting was placed on regional cooperation and knowledge sharing.

EeMA is implemented by the GIZ Open Regional Fund for SEE – Energy Efficiency and the Fund for Modernization of Municipal Services. It is financed by the German Federal Ministry for Economic Cooperation and Development (BMZ) and the Government of Switzerland. Key partners, among others, and direct activity carriers in this project are also members of NALAS Task Force on Energy Efficiency.

At the gathering, results achieved through the successful cooperation were deemed manifold. These were presented as to include strengthened capacities of LGAs to provide adequate services for fostering Sustainable Energy Municipalities (SEM) and improved energy efficiency conditions in several municipalities of SEE countries. Further stated accomplishments, achieved within the successful implementation of 18 pilot projects across SEE, were numerous energy efficiency measures implemented in public buildings, hospitals, kindergartens, student dormitories, community centers, street lightening etc. Other achievements mentioned referred to the development of Sustainable Energy Action Plans(SEAPs) by three municipalities in Kosovo and increased public awareness on energy efficiency in targeted municipalities across the region. All these achievements contributed to improved conditions in the energy efficiency sector in given countries.

Distinct attention was given to the peer-to-peer approach used as the platform for this regional knowledge and best practice exchange. Other important joint accomplishments mentioned were the development of the Sustainable Roadmap for Associations of Municipalities in SEE Countries, devised as a strategic plan outlining activities which LGAs can undertake to proactively support the development of SEMs, and the established fact that already several implemented pilot projects will have a follow-up. This, once again, seems to demonstrate the success of the regional collaboration.

Dubravka Bošnjak, EeMA Project Manager, stated: “I am proud to say that the EeMA project through this important regional cooperation of the various LGAs has achieved many tangible results crucial for the EE sector in SEE countries.” Project partners also stated they are highly satisfied with the existing regional cooperation and stressed the need for more such projects in the future.

On the occasion of the Task Force gathering and in the light of the topic of knowledge exchange, the group also used the opportunity to visit the TINA Vienna – Smart City Wien Agency and the District Cooling Centre of Vienna. The aim was to get an insight into energy efficiency practices of the Centre in providing district heating to important buildings in Vienna and to learn about the Urban Energy Efficiency Program and Action Plan of Renewable Energy of Vienna.

In conclusion of the meeting, the Task Force also discussed the upcoming energy efficiency programs of the NALAS network at national and regional level.