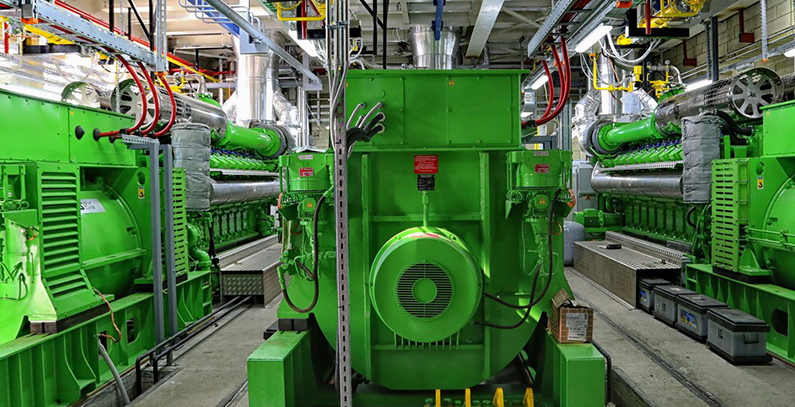 On August 24 the first kilowatt-hours of electrical energy were generated from combined heat and power (CHP) plant of 10 MW in each of the segments at the district heating plant West (Zapad). In cooperation with Dušan Macura, chief of heat production and distribution sector at the public heating utility Novosadska Toplana we present the chronology of the realization of this very important and big project, first of its kind in Serbia.

The particular idea was born in October 2008 at the Italian economic summit in Belgrade. Colleagues from the country were consulted about the potentials of introducing cogeneration in district heating systems with the supply of domestic hot water. The endeavour was on hold until the Government of the Republic of Serbia issued the first decree on incentives for the production of electrical energy from renewable sources and CHP production in December 2009. Conditions were then met, with the legal frame, for the construction and exploitation of cogeneration facilities and possibilities opened for serious preparation of the project.

The first analysis of the annual balanced hourly load diagram for domestic hot water preparation at district heating plant (DHP) West was in 2010. The basis diagram for load of 10 MW of heat, from the technical and economical feasibility study for the introduction of cogeneration at the heating source, was sent to colleagues and current management. It became the essential motive and the confirmation of the sustainability of implementation of such a facility. An interesting fact is that the analysis was at the time conducted according to an example of then high-end technology – gas-fueled engine GE J920, which became available for commercial use only in January of this year. The period of the return of investment of close to two years remained significant until this day.

Dušan Macura, chief of heat production and distribution sector:
The vision about the transformation of Novosadska Toplana into a modern and sustainable system of remote energy supply became reality. The introduction of cogeneration at heating source West means that a significant amount of power, more than 80 GWh per year, will be produced and delivered to the grid at a stimulating (feed-in) tariff by the utility as a preferential producer of electrical energy. At the same time, heating of more than 80 GWh per year for domestic hot water preparation will be delivered and significantly reduce fuel expenditure in existing gas-powered boilers.

In 2011, construction design company Termoprojekt, at the time the only one with significant experience with stronger cogeneration units, produced the concept design with feasibility study. The designers managed to place three cogeneration modules and the complete facility into a very limited space behind boiler K6 at DHP West, into the existing construction infrastructure. Engineers Mirko Nikolić and Marko Gojnić, pioneers of cogeneration with gas engines in the region, have contributed greatly to the materialization of the idea. The remaining factor was for Novosadska Toplana to provide funds for the CHP unit’s construction.

Negotiations with KfW Development Bank from Germany about participation its programme started in late 2011. Unfortunately, at the time there was no support nor understanding by the city government. Only after KfW’s experts saw the feasibility analysis and concept design and noted the extraordinary potential and sustainability of the idea, we managed to make the project enter the investment plan. The country’s government, the City of Novi Sad and the local utility signed a trilateral agreement on the usage of loan funds intended for programme  ’Rehabilitation of the District Heating Systems in Serbia – Phase 4’ in April 2012. The agreement included the utilization of a loan for three proposed projects, worth EUR 11 million, with a grace period of three years and an interest rate of 2.5% per year. The implementation over the following four years was conducted in order according to criteria of operational risks and technological needs of Novosadska Toplana. In 2014, boiler VK6 was installed at DHP North (Sever), and in 2015 a circulation facility was added at DHP East (Istok).

Dobrosav Arsović, director:
The construction of this cogeneration plant included us in the history of the development of the district heating system in Serbia. With great gratitude to the professional team which made this project reality, it is an understatement to say I am proud of the final result and achieved success!

The preparation of tender documentation for the design and construction of CHP facility with Klaus Eisgruber, consultant from KfW and technical expert, began in August 2014. The international tender was launched in the following January by a pre-bid meeting, where a total of 18 interested, mostly foreign companies sent their representatives. At the end of February 2015, six overseas and one domestic consortium filed offers for the design and construction. The central programme implementation unit (CPIU) of the Ministry of Mining and Energy selected the most favourable offer in April and Novosadska Toplana signed a contract with Energotehnika – Južna Bačka in July 2015 according to Fidic yellow book ’Conditions of Contract for Plant and Design-Build’.

The implementation of the project in the name of Novosadska Toplana was run by the expert oversight project team consisted of Josip Polc, Dušan Macura, Goran Trajanovski and Mirjana Aćimović – Simin. It held 52 weekly meetings of project teams with the contractor, designers, FIDIC’s engineer and KfW’s project supervisor. The following document contains the key points and timetable of activities before the cogeneration unit was launched. 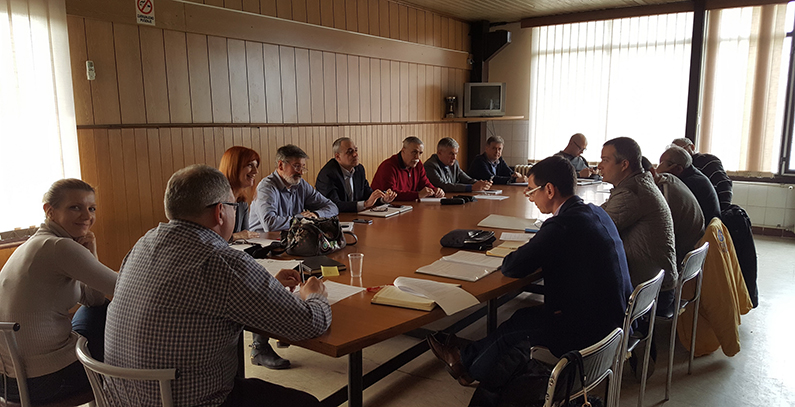 Photo 1: Meeting of the project team

Today, when the cogeneration facility is finished, when Novosadska Toplana got the permit for conducting energy activity of combined production of heat and power and obtained the status of a privileged power producer for 12 years, and when the power plant started a 12-year exploitation period with a secured contract on complete maintenance, experiences can be summed up and focus can be shifted to plans for the future. The final value of the investment in EUR 6.28 million. The power purchase agreement (PPA) guarantees the incentive price (feed-in tariff) of EUR 90.5 per megawatt-hour until August 2028. The annual value of electrical energy which will be produced in the power plant will be at EUR 7 million. With current conditions, with the price of gas and parity, the simple return of investments including all expences (gas consumption, amortization, earnings) is two years. 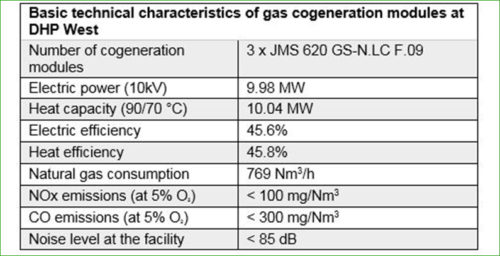 By becoming a preferential producer, the utility introduced a strategic product – electric power. It secured additional income of EUR 3 million per year, it reduced the risk and increased the stability of the enterprise’s operations. After a two-year period of the return of the investment, the complete income from power generation can be redirected to new, attractive and profitable projects of boosting the system’s energy efficiency, which would cut costs, and production and distribution of heat energy would be made cheaper, more efficient and more reliable. 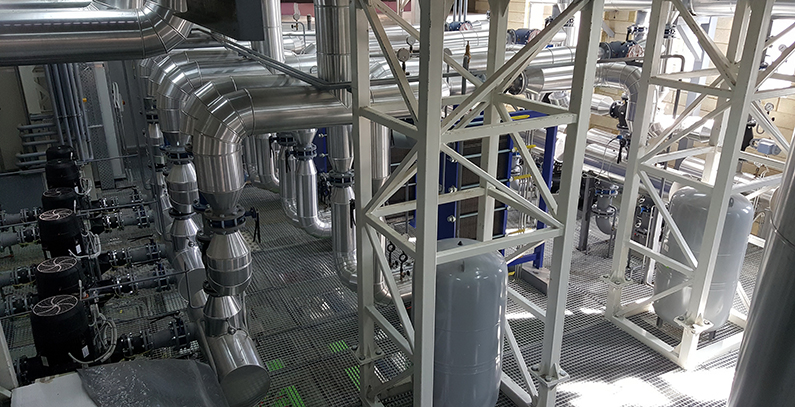 In the next phase, the heating plant should use the potential of CHP plant West to register it within the Clean Development Mechanism or the European Union’s emissions trading system (EU ETS phase three), and to certify its carbon dioxide emission reduction and sell the Certified Emissions Reduction (CER) certificates at the market to buyers from some of the Annex B countries.

At the moment this is the biggest gas engine cogeneration plant and the first CHP unit in a district heating system in Serbia. The firm has become a leader in the transformation from conventional to modern and sustainable and district energy in our country. Beogradske elektrane, utility from the capital city, plans to build an identical cogeneration facility at Voždovac heating plant. Magazine Corporate Vision nominated Novosadska Toplana at 2016 Eastern European Business Elite Awards. The successful realization of the project and a generally exceptional economic effect in the exploitation phase are a good example and motive for other energy entities and investors. In a very short time five young people were trained for the job of a cogeneration unit operator.

Vladislav Pavićević, FIDIC engineer:
The new unit is the biggest cogeneration facility of the type in Serbia by capacity and efficiency. Apart from high efficiency, the new unit is in line with all legal requirements for environmental protection and, actually, in practice it has greenhouse gas emissions significantly below legislative norms, an in the range of the strictest European rules.  With the construction of this power plant, Novosadska Toplana ceases to be the distributor of heating energy and becomes a system of remote energy supply.

It is of the greatest significance for Novosadska Toplana to completely implement its strategy of development until 2021. It is necessary to verify the potential of combined production with the capacity of 4 MW of thermal energy at heating plant DHP South (Jug), and to use incentivizing measures which last through 2018. Aside from that, securing a basic source of heat of 100 MW for the city of Novi Sad from some of the renewable energy sources needs to be among the priority goals within the existing infrastructure of district heating system. So does the strengthening of energy efficiency in construction together with the rehabilitation of thermal shells of buildings with very high specific heat consumption. Also, it is of key importance to define, produce and adopt a strategy of development for 2021–32 and to prepare in time for the so-called energy transition.