Photo: Minister Petar Đokić at the location where the Grebak wind farm will be built 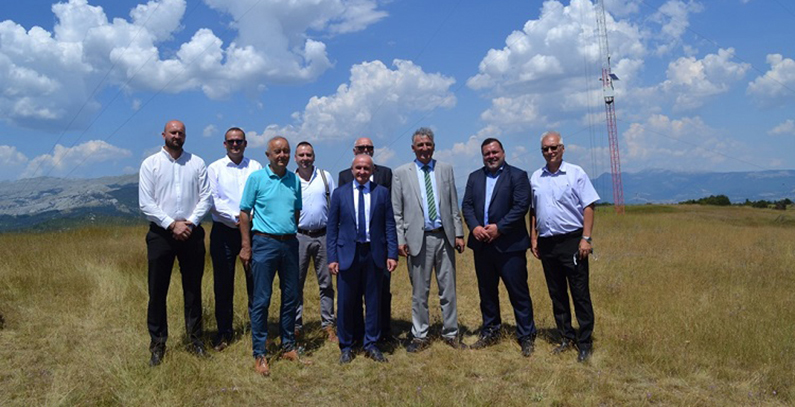 The construction of the Grebak wind farm, the first in the Republic of Srpska, is expected to start in October.

The investment in the 50 MW wind farm is estimated at around EUR 65 million. The concession agreement between the Ministry of Energy and Mining of the Republic of Srpska and German company VE Grebak was signed in April of last year. In BiH, in which the Republic of Srpska is one of the two entities, only two wind farms have been built so far – Mesihovina and Jelovača.

Minister of Energy and Mining of the Republic of Srpska Petar Đokić said the investor would keep its promise and kick off the construction in October. Republika Srpska will receive around EUR 500,000 a year as a concession fee, he added.

Almost the entire amount will be paid into the budget of the Municipality of Nevesinje.

Đokić has announced that the concession procedure for the construction of a wind farm in Trusina would be renewed. He asserted he expects a new investor to be selected this year. The concession agreement for the site was terminated in March 2019.

The Herzegovina region has the potential for several more wind farms, but construction is limited by the capacity of the transmission network, which implies that electricity transmission company Elektroprenos – Elektroprijenos BiH should start expanding it, he added during the visit to the location where the Grebak wind farm will be built.

The expected annual production of the Grebak wind farm is 150 MWh, and the start of work is planned for the middle of 2022

Admir Rahimić, the representative of the German investor and director of VE Grebak, said the wind farm would have the most advanced technology by Siemens with 6.6 MW turbines, so that the number of turbines would be reduced from 15 to eight.

The expected annual production is 150 MWh, and the start of work is planned for the middle of 2022.