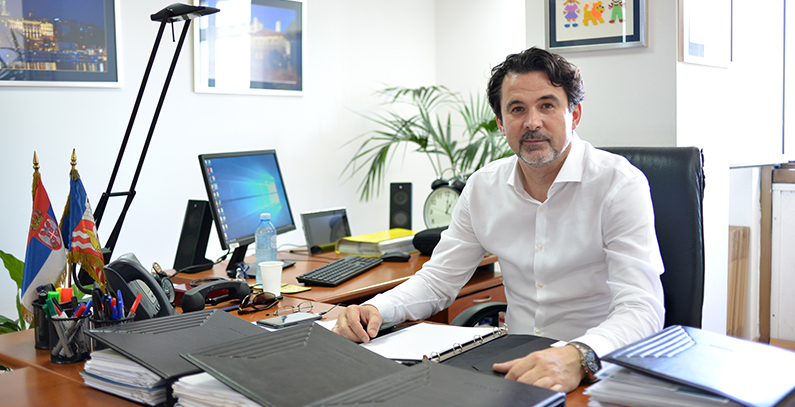 City of Belgrade Energy Secretary Marko Stojanović spoke to Balkan Green Energy News about the concept and the mechanisms of the newly-formed city’s Energy Efficiency Fund which will be as of next year also available to private citizens to upgrade the energy efficiency of their buildings. This is a revolving fund which is now being financed from the budget with plans to secure funding from international financial institutions and from commercial banks at some later date. The basic idea is for the City to be the partner and guarantee of all financial and other obligations while city residents would repay invested funds through their communal services bills with no interest over a period of several years.

What is the concept of the city Energy Efficiency Fund and what will its guiding principle be? What mechanisms will it use?

We decided that the concept of an energy fund will be a revolving one, which means that the funds would be repaid. The funds would not be allocated directly to users of public buildings owned by the city and to the tenants’ associations but would be allocated to projects. The city of Belgrade would select companies to draw up projects, do the work and conduct supervision works. The city authorities would make sure the work is done at the best quality level and in the most efficient way through procedures regulated by the law on public procurement. We would use contract to make sure that the effects of energy savings are recorded and monitored over a long period. The repayment of the invested funds  would be executed through the communal services company Infostan and monthly bills over an acceptable period of time for the citizens.  I am referring to the period of 10 or more years with no interest or exchange rate clause, that is an amount in dinars that the city invested.

This is a complex model in which the city of Belgrade take its share of responsibility to include tenants’ associations and apartment owners and motivate all investors. We would make sure that the spending of funds set aside for the project is controlled at all stages, the city authorities play a direct, significant role because that is very important for financiers who have been very skeptical to date.

As of this year, public buildings, owned by the City and as of next year apartment owners as well, that is tenants’ associations, will be able to apply for funds following public invitations published by the city authorities. The same method would be used to select all other parties involved by implementing the law on public procurement.

How would international financial institutions join in the Fund?

Besides its own funds which will be earmarked in the budget, the City authorities are counting on indirect budget funds. Large financial investors who have been already cooperating with the City authorities on this or other similar projects have already expressed interest in joining the project.  The European Bank for Reconstruction and Development (EBRD), International Financial Corporation (IFC), European Investment Bank (EIB), UN Environmental Program (UNEP) are very interested in placing significant funds into energy efficiency projects and realize the advantages of this model because the City is a partner and guarantees all financial and other obligations.

We will motivate those financial institutions to take part in the Fund through public invitations with predefined conditions for participation. The City of Belgrade would be the sole user of the funds to be used only for projects implemented through the Energy Efficiency Fund. A similar arrangement would be possible with the commercial banks in the next project cycle when all this takes off. The banks who have credit lines for this purpose would be also invited to join in the Fund.

The Fund is formed with no time limit and the structure and funds are planned at annual level so that we will have a different amount of funds every year and probably different, improved financial conditions. Public invitations would be published every year.

The Fund is not a legal entity, it is currently only a financial component in the financial plans of the Energy Secretariat of the City of Belgrade.

The idea is to improve the concept of the Fund every year with clear intention that the Fund evolves into a legal entity that is jointly owned by the city of Belgrade and the investors, and as such to become a member of the energy holding which the city authorities intend to form in order to tackle energy projects more seriously.

Which city institutions and companies will be involved in the Fund?

The Mayor’s cabinet is the main player in the project. The Mayor signed an act to form the Energy Efficiency Fund. All decisions are taken by the Fund Commission which the Mayor formed and is made up of the city secretaries in charge of the most important secretariats and institutions.

The Energy Secretariat,together with other secretariats and public district heating company Beogradske elektrane and Infostan company, implements and manages the projects and their financing through the Fund. The Energy Secretariat works with those two companies to draw up materials and decision proposals for the Commission.

What do you mean when you say energy holding and when do you plan to set it up?

This year the development strategy for Belgrade’s district heating company was brought, as well as the development strategy for the city of Belgrade, which recognizes the energy sector as an important sector for the first time.   The experiences of other cities, primarily the city of  Vienna which is similar to Belgrade in terms of parameters and capacities, show that they defined their heating supply companies as the nucleus of future energy holding. Vienna has more than 10 energy companies with various ownership and organization forms but they are all under the ownership structure of the Wien Energy Holding which the city owns 100 percent.

We want to implement other energy projects in Belgrade too – a heating pipeline, large cogeneration, the use of renewable sources through various models of cooperation with partners – public-private partnership, joint ventures or other models,  but it will all be part of one energy system with one company representing the City.

Belgrade district heating company,  based on all parameters – technical, organizational, financial, could be this company – the City could implement its business activity of its energy policy through this company. In this way the City would have several companies dealing with energy projects but all of them would be in the service of Belgrade and in the interest of its citizens.

This year RSD 120 million have been set aside for the Fund in the city budget. Do you have projection for next year?

It’s still too early to say. I expect more funds to be earmarked every year. Since we have been already negotiating with serious financial investors who are willing to take part in the project, I expect the amount to be higher next year.

Since the Law on housing and maintenance of buildings  was adopted early this year, we could not launch the financing of residential energy efficiency projects. The law created the legal basis for the City to invest into the citizens’ private property with regards to upgrading energy efficiency as a public interest endeavour.

This year, the public call will be announced only for the public buildings. That is a good step for all these procedures to be tested on a smaller number of buildings so that we could see all the effects.

Every beginning is difficult and we are aware of the economic and social situation in which we are to implement this project. However, this is only the beginning which is to include only few buildings. We cannot refurbish 100, 200 or 300 buildings in the first year. We will start with five or six projects.

When we are talking about the Fund, we are very realistic and pragmatic – we want to make concrete steps and impacts. We know that we will be dealing with this for another 15 to 20 years.

Have you prepared any projects to raise energy efficiency levels in public buildings which would be financed by the Fund this year?

Since we have been announcing the Fund for more than half a year, all public buildings users have been informed about it. They are preparing  projects so we can count on two or three public buildings to undergone the refurbishment process.  Which buildings will be chosen, we will know only after the public invitation and the commission’s  decision. We believe that those projects will mainly be completed by the end of the year.

The public call will be published right after the budget review which is on the agenda of the Belgrade City Assembly this week.  We expect that the public call procedure and selection of contractor will be completed during the summer and that the project implementation is to start in September.

How much money should be invested in upgrading energy efficiency of residential buildings sector in  Belgrade and how big would the savings be?

The estimated value of the residential sector refurbishment that is connected to the district heating network is around EUR 1.2 billion. That is why I say that this is a project which will last for a long time. If we implement it, we will have at the disposal around 1,000 MW, which equals one third of 3,000 MW capacity of Beogradske elektrane. and equals the production capacity of the Djerdap hydropower plant.