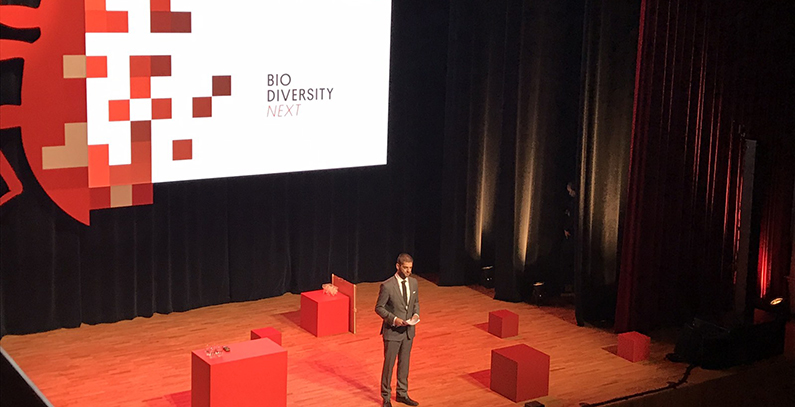 The city of Leiden in the  Netherlands was the capital of biodiversity when it hosted a four-day conference titled Biodiversity_Next in the second half of October. For the first time at this scale, the event brought major international organisations, research scientists, and policy makers together to jointly identify socio-technical bottlenecks and horizon-scan opportunities around data-intensive biodiversity and geodiversity research.

The conference’s Chair, Dimitris Koureas, pointed out that the rate of producing data is increasing. More data is produced in today’s world, not only around biodiversity, but other related fields of science, than ever before in the past.

Koureas said: „It is extremely important to understand how we, as a community that really handles, produces, curates and disseminates information around biodiversity really need to act together. To be able to respond, not only to the increasing amount of information, but also how we affectively translate that information into actionable knowledge for policy making in the future“.

Milena Bataković, Agency for Nature and Environment Protection of Montenegro

„Biodiversity_Next Conference was a great opportunity to increase information on available tools different aspects of biodiversity data management as well as to compare our national experience and challenges with international practice. Also, it was useful to hear from keynote speakers the future plans, intentions and trends. We also heard a lot of useful examples that can be implemented in the daily work of Montenegrin national institutions“.

The Biodiversity_Next Coference aimed at:

Tanja Kapetanović, Environmental Fund of Federation of Bosnia and Herzegovina

“Attending Biodiversity_Next Conference, which was organized by globally most prominent platforms and initiatives in the field of biodiversity informatics, gave me a better insight at our “beginner” status, domestic weaknesses and challenges. The Conference also shaped my positive attitude and energy to go further with our efforts. In spite of the fact that there is a great experience of many developed countries in biodiversity informatics, the conference indicated that there are many open questions in this field and improvements are needed. This gave me an impression that we are all part of the same solution, no matter how small or new in the field we are”.

More than 700 participants from 76 countries took part in the event and 360 conference abstracts have been published at the Biodiversity Information Science and Standards (BISS)[1]. 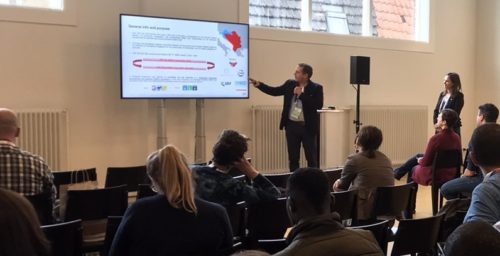 Biodiversity_Next brought the critical mass of actors and stakeholders together and set the scene for discussing the next steps in biodiversity protection information systems, also under the umbrella of the newly formed alliance for biodiversity knowledge.

Paul Hebert, evolutionary biologist and keynote speaker, said that the advancement in biodiversity work and the change in the way people perceive solutions to problems may be facilitated through the events similar to Biodiversity_Next Conference:

“Individual researchers and research groups are focused on the battle plan, how they are to advance understanding of biodiversity, and then all of the sudden, you’re listening to someone talking about something you have never thought about and it changes your perception of the solution to this big problem we are facing. They hear you speak and all of a sudden you see opportunities for collaboration. So bringing together 750 people in one place is definitely a kind of thing that needs to happen more frequently in biodiversity science.“

“It was a valuable opportunity to participate in a Conference of the first of its kind where major players in biodiversity informatics (GBIF, CETAF, IDIGBIO, LIFE WATCH, DISSCO and etc …) joined forces to develop a global biodiversity information strategy to help secure the earth’s geological and biological wealth. With our poster and powerpoint presentation we informed other participants about biodiversity information management activities in the region and our efforts to establish a functional information system where biodiversity data will be collected, processed and stored in line with FAIR [2] principles. We have many challenges ahead of us but with good regional cooperation and the exchange of knowledge and practices we can reach it.”

In the light of „thinking out of the box“ and perceiving innovations as a possible solution to biodiversity advancement, the conference featured some very interesting speeches and presentation by the keynote speakers.

The region of South-East Europe, which is known for its exceptional richness of biodiversity, has been represented by the Biodiversity Task Force members: Dejan Radošević from the Republic Institute for Protection of Cultural-Historical and Natural Heritage of Republika Srpska and Milena Bataković from the Agency for Nature and Environment Protection of Montenegro and the BIMR regional platform members: Adi Habul from the Environmental Fund of Federation of Bosnia and Herzegovina and Edita Zekjirovikj from the Ministry of Environment and Physical Planning of North Macedonia.

Adi Habul, Environmental Fund of Federation of Bosnia and Herzegovina

„Biodiversity_Next Conference was a great opportunity to improve my knowledge and collect information related to nature protection information systems, in general. Each of the conference’s co-organizers made a great effort to present the current trends, programs, activities and collaborations in the field of biodiversity informatics (data using, managing and sharing), and to inform the conference’s audience with upcoming initiatives and projects.

Among many presenters, Evolutionary Biologist Paul Hebert’s plenary speech was very interesting. His research employs DNA-based approaches to advance understanding of biodiversity. As a Scientific Director of the International Barcode of Life Consortium, he was one of the key persons in the nation alliance that completed its first major research program, BARCODE 500K. His new program, BIOSCAN, will try to achieve “impossible” – to collect every living species in the next few decades. Moreover, his presentation was interesting, showing the kind of new vision of binding collected data on species with a more ecological approach.”

Both presentations pointed at the importance of regional cooperation in biodiversity protection and presented the region as an attractive and unexplored biodiversity spot on the Earth.

“It has been a huge privilege to lead and work with such a great team of partners who put enormous effort and enthusiasm in preparing and presenting the materials to the conference audience. The conference was indeed very informative and a great chance to spend time with organizers and members of the biodiversity community but also to share and exchange knowledge and learn new tools in biodiversity information science”.