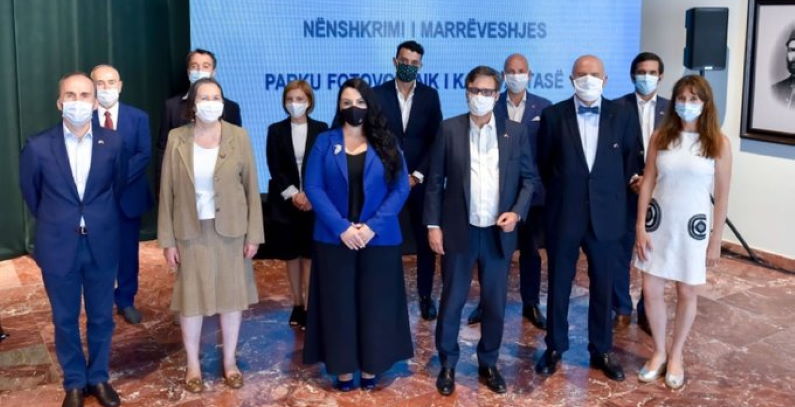 After winning the auction, French company Voltalia landed a 15-year fixed rate deal for half of the production of the future 140 MW photovoltaic plant in Albania. The Karavasta Park concession agreement is for 30 years.

Minister of Infrastructure and Energy Belinda Balluku and Chief Executive Officer of Voltalia Sebastien Clerc have signed a 30-year concession agreement for the construction of a 140 MW photovoltaic facility in the west of Albania. The French company offered EUR 24.89 per MWh, the lowest solar power price in Balkans, according to the auction results published in May.

The initial level was EUR 55 per MWh and 30 companies competed for the project. Balluku said the offer was “extraordinary” and that the deal would boost Albania’s profile among French investors.

Prime Minister Edi Rama also highlighted the benefits for the domestic economy and the country’s image. He said Voltalia’s investment of EUR 100 million would begin in September.

The project is worth EUR 100 million and implementation starts next month, according to Prime Minister Edi Rama

The French partner’s fixed rate applies for only half of the capacity at Karavasta for the first 15 years, while the remainder of the output will be sold through a long-term contract at market prices.

The Karavasta Park site is near the eponymous wetland and lagoon. The authorities in Albania claimed planners of the giant solar power have avoided the protected area.

The 100 MW photovoltaic project in the Akërni salt flats has been on hold for almost two years, since India Power’s consortium gave the best bid at Albania’s first auction

Voltalia was established 15 years ago. It is also active in the sectors of wind power, hydropower, biomass and power storage systems. Because of the coronavirus pandemic, the auction was delayed twice since the public call was issued in January.

The first such contest was held in 2018 and the deal was signed with India Power’s consortium at EUR 59.9 per MWh for half of the planned 100 MW. Voltalia participated in the auction. The project in the Akërni salt flats, also a protected area, has been on hold since, pending negotiations.