Aarhus Centers to initiate dialogue between citizens, business, and state on circular economy 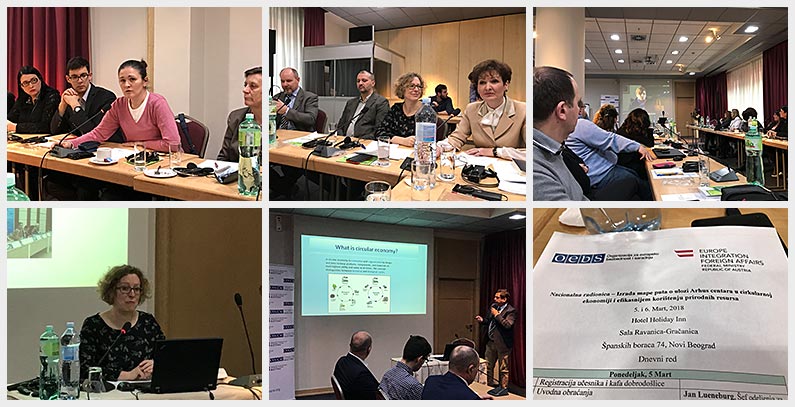 Aarhus Centers will foster transition to a circular economy and more efficient use of natural resources by providing a framework for the exchange of information, knowledge, and experience between citizens, decision-makers and the private sector.

This is one of the main takeaways from the first national workshop in Belgrade, which marks the launching of a project to strengthen the capacities of Aarhus Centers in the transition to the circular economy and a more efficient use of natural resources. The project, implemented by the Organization for Security and Cooperation in Europe (OSCE) and funded by the Federal Ministry of Austria, brings together 14 Aarhus centers from eight countries.

As a moderator of the workshop, Olivera Zurovac Kuzman, head of the Sector for Environmental Protection in the Democratization Department at the OSCE Mission to Serbia, recalled that official projections show that by the year 2030 the world’s growing population will need 50% more food, 50% more energy, and 30% more water, noting that a circular economy is a way to secure these resources.

Jenniver Sehring, Economic and Environmental Affairs Coordinator at the OSCE, said that in the transition to a green economy, this organization could provide a framework for discussion and exchange of experiences, as well as for cooperation with the private sector.

The project aims to enhance Aarhus Centers’ capacity and a mutual exchange of experience, as well as to allocate small grants for activities at the local level.

She said that the objectives of the European Strategic Framework for Greening the Economy are to reduce the risk of environmental pollution, encourage economic progress and improve human well-being and social equity.

“The main areas in which Aarhus centers can contribute is building a knowledge base and raising awareness, monitoring the process of greening economies, contributing to the development of strategies, plans and laws, and using tools developed within the Aarhus and Espo Convention,” she said.

Jan Lueneburg, head of the Democratization Department at the OSCE Mission to Serbia, expressed gratitude to Austria for its support, as well as the Serbian Ministry of Environmental Protection, which helped Serbia to join this pan-European project.

Srđan Stanković, advisor to the environmental protection minister for cooperation with civil society organizations, said that the circular economy is a topic of the 21st century.

“The current economic model or linear economy suggests that a man is at the top of the pyramid and uses everything else. It is an egoistical approach that has devastated nature,” he said.

The circular economy in relation to the linear, which is dominant today, implies the most efficient use of resources, and the prevention of their waste, which is the final consequence of the linear economy.

The circular economy introduces new business models: leasing, for example, means that you do not buy paint for painting but meters of painted surface, sharing implies that almost everything can be rented, and paying for the effect means that you don’t buy bulbs but lighting.

And so we have companies that rent baby equipment, chairs, and washing machines. When your child grows up, used baby equipment is returned, and you can rent new equipment. The company in question repairs baby equipment and rents it all over again.

As an example of the circular economy, Mate Kriza, chairman of the Hungarian Foundation for Circular Economy, cited modular cell phones.

“Companies produce phones that are made of parts, modules, which makes them easier to repair, so you do not have to change your phone every two or three years. There are companies that rent washing machines, where the customer pays only for washing their laundry – you pay by washing cycle,” he said, highlighting the Netherlands as one of the countries with the strongest circular economy business communities.

Milan Veselinov, a national expert for circular economy, said that the circular economy is often equated with waste and waste management in Serbia, but that resource efficiency is something else.

“Serbia uses 15.5 metric tons of material per capita, and the EU 13 metric tons, but what is more problematic is resource productivity, with Serbia producing a value of EUR 0.23 per kilogram, and the EU as much as EUR 2.07 or 900% more. We have a major problem here, but also a chance to develop,” he said.

Europe took 11 years to reach the 60% reuse target and the 55% recycling target, and Serbia seeks to achieve similar levels in four years. According to Veselinov in order to fulfill these goals Serbia needs cultural transformation first and only then technical transformation, so it is not realistic to expect these goals to be reached.

“The Serbian economic strategy is centered on growth and development, but in reality only on growth. Under the growth model, we strive to have as many products as possible, to develop production capacities, and therefore we focus on more, not on better products, and on lowering costs through mass production. Growth through development is the principle of a circular economy that seeks more quality products with a higher value, which will give us pioneering positions on the market and higher profits. The transition from the growth model to the development model is similar to the transition from fossil fuels to renewable energy sources. In spite of everything, I do not think it’s too late to change our model,” he said.