Tilos island is getting ready to become 100 percent green 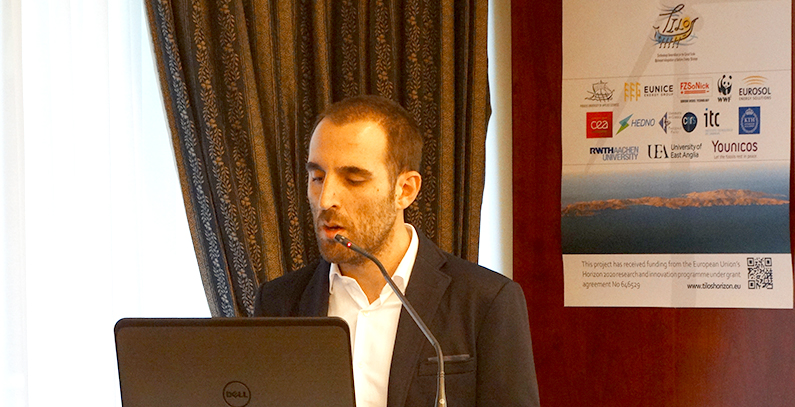 The innovative hybrid, renewable energy-based battery station and smart microgrid project for Greek Tilos island power supply is ready to commence its trial operation. Since its inception, exactly three years ago, the project has attracted much attention worldwide. It combines energy production from renewable sources – solar and wind, and storage in accumulators with the goal to help this island in a quiet corner of the Aegean minimize expensive energy imports, avoid power cuts and make their environment greener.

A few days before the beginning of the trial operation, Balkan Green Energy News, which continues to follow the development of the project, talked to Dimitris Zafirakis, energy engineer and project coordinator for Tilos H2020 Project.

The island Tilos is finally going to witness a trial operation of the long-awaited, innovative project. What are the core innovative elements of this project in terms of energy generation and supply?

The DSM network already engages ~100 residential consumers with the final goal being to reach 150, including also eight water pumping stations of Tilos island. This DSM pool provides deferrable loads in the order of 20% of the total island’s loads, which can be controlled in order to enable higher RES penetration through load shifting. At the same time, partial load shedding could also be an option in extreme cases of reduced power supply, owing to the loss of the Kos island interconnector and the low levels of energy stores and power production from the hybrid power station side.

All of the above are innovative elements of the smart microgrid developed in Tilos, built to operate both autonomously and in connection to the island of Kos.

The electricity sale contract between the Hellenic Electricity Distribution Network Operator (HEDNO) and EUNICE Energy Group, one of the leading renewable energy companies in Greece, was signed in January. It made TILOS Project officially the first hybrid station of electricity production from renewable sources. What are the relations with HEDNO?

Relations with HEDNO are excellent. In fact, it is without saying that HEDNO has contributed tremendously both as the partner of the project and as the local DSO. This is reflected in the recent issuance of the first-ever Power Purchase Agreement for a Hybrid Power Station in Greece, which allowed also for the beginning of the project trial operation.

It is estimated that the project will cover up to 80 percent of the energy needs of the island? Do you expect the island to eventually become completely self-sufficient energy wise?

The expectation concerning annual RES penetration is in the order of 70-75%. For the island to reach 100%, extra RES capacity is required, which could come in the form of more PVs, either centralized or distributed.

There are ideas on having a second layer of neighborhood-level PV-storage configurations or a centralized PV station, owned by the local Municipality or a local energy cooperative.

At the same time, PUAS develops a PV-based electric vehicle charging station on Tilos, which is going to be the first of its kind on a Greek island. This will gradually boost the EV sector on Tilos, that will in turn further maximize the penetration of RES, not only in the electricity sector.

What is the wider scope of benefits in greening Tilos?

The wider scope of TILOS project is to create a versatile and modular energy solution that can be easily replicated in small and medium scale islands of Europe in order to reduce oil-dependency and maximize exploitation of local RES power generation. At the same time, the project also looks at the creation of mainland microgrids that could interact with a centralized power market, which at a certain level imitates the Tilos-Kos case.

Is 100% green Tilos possible in any foreseen future? What will it depend upon?

Yes, it is. It will depend first upon the smooth operation of the current Tilos energy solution and secondly on the engagement of the local population to progress even more. Evidence to this end is quite positive so far, reflected also on the shift attempted towards EVs.

It is also announced that Tilos will be able to occasionally help the neighboring island of Kos with energy, how so?

Currently, the interconnector between Kos and Tilos is used to feed Tilos, mainly with oil-based power generation. When the Tilos solution will be in operation, the interconnector will be used to export energy, this time from Tilos to Kos. What is more important is that this excess energy could come in the form of guaranteed energy amounts through the energy storage component of our system. Such guaranteed energy amounts will be of high value since they will be normally used to offset expensive thermal power units used to cover peak demand periods for the system of Kos.

Do you find energy cooperatives useful and plausible additions or alternatives in smaller communities/islands? Is Tilos going in this direction?

As I mentioned, the development of an energy cooperative could be the way forward for Tilos. But this is up to the people of Tilos to decide. Generally speaking, partnerships between energy cooperatives and private investors/consortia could offer the much-required balance in these types of endeavors.

**** The Greek Tilos project was the double winner of the EU Sustainable Energy Week (EUSEW) Awards 2017 for innovative energy projects – the first ever winner of the Energy Islands Award, for its contribution to the island’s energy security through its ground-breaking battery-based hybrid power station, and also the winner of the Citizens’ Award, chosen from the 12 finalists in an online poll with over 10 000 votes.