Winners of the EUSEW Awards 2016 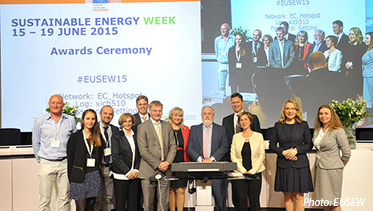 The winners of EU Sustainable Energy Week (EUSEW) Awards 2016 for innovative energy projects were revealed at the Awards ceremony in Brussels on June 14. For the first time, this included a Citizens’ Award, chosen online by thousands of members of the public.

The ceremony marked the end of the first day of 2016 EUSEW Policy Conference. EU Commissioner for Energy and Climate Action Miguel Arias Cañete, energy and consumer experts and press were in attendance to congratulate the successful projects. Short films showcased the three finalists for each of three categories – Consumers, Public Sector and Business – before members of the Awards jury announced the winners.

The Consumers prize was awarded to EcoGrid EU in Denmark, a project that demonstrates how smart grids can help consumers balance their energy demand with available power from renewables.

“We are very proud to win this award. We’re a small island and the prize is for the entire community of Bornholm. We want to be carbon neutral by 2025, and in 2017 all our power will be generated by renewable sources,” said the project’s spokesperson.

The Public Sector Award was awarded to Pokupsko Municipality in Croatia for its programme of energy efficiency and renewables projects for it to develop as sustainably as possible.

“Being nominated as a finalist for the EUSEW Awards was a great surprise and powerful recognition of the efforts made in our small community of 2500 people,” said Bozidar Skrinjaric, Mayor of Pokupsko. “It took us ten years to make these important sustainable energy changes – the prize motivates us to go further and become a 100% ‘renewable community’!’’

“These investments make good business sense, and we encourage our suppliers to get on board because that’s how it works best – you can’t do big projects like this by yourself,” says Roland Verstappen, Global Director Public & Governmental Affairs of brewery owner Heineken International.

New to the competition was the Citizens’ Award. The winner was chosen from the nine finalists by a public online poll, with almost 9 000 votes cast by the 6 June voting deadline.

With a total of 1512 votes, the winner of this category was Green Brewery Göss, a double winner!

“These projects were chosen for their excellence, impact and potential to be replicated across Europe,” says jury chair Jerzy Buzek, Chair of the European Parliament’s Industry, Research and Energy Committee. “They’re a real inspiration to citizens, industry and public bodies. We’re already excited to see what next year brings.’’