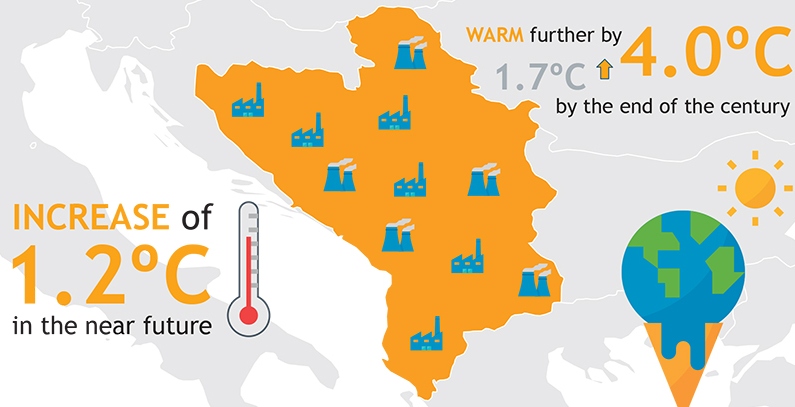 Regional Cooperation Council (RCC) has published a Study on Climate Change in the Western Balkans, showing alarming increase of temperature over the whole territory, with observed temperature increase of 1.2 degrees Celsius in the near future, destined to warm further by 1.7 – 4C and even exceeding 5C by the end of the century, depending on the global effort in greenhouse gases (GHG) emission reduction.

Ana Vuković, PhD, author of the study together with Mirjam Vujadinoć Mandić, PhD, said that study represents integral approach in climate change analysis, its impact and vulnerability assessment, initiated with knowledge collected from available documentation of the economies and scientific papers relevant for combating climate change in this region.

“The Study includes data for near future, mid-century and end of the 21. century of number of climate related parameters relevant for different sectors and gives the basis for recognizing the need for regional cooperation in achieving common goals and overcoming lack of capacities of individual economies in fulfilling the complex task of adaptation on changeable climate conditions and achieving sustainable development of the region,” Ana Vuković, an assistant professor at University of Belgrade Faculty of Agriculture, said for Balkan Green Energy News.

The Study also issues a set of recommendations to reduce burden on a single WB economy in resolving climate change related issues, in particular given the lack of human resources and other capacities, through enhancement and focusing on regional cooperation.

Intrusion of sub-tropical climate further to the north

Summer temperature (June-July-August: JJA) increase is higher than the mean annual up to 0.5-1C, and in case of constant global GHG increase, the temperature for this season will exceed 5C increase at the end of the century period compared to the present climate, the study finds. Further, study reads that impact of climate change is more visible in change of annual precipitation distribution, which is evident from severe drying of the summer (JJA) season, more pronounced towards the south of the region and in coastal areas.

The climate change shows in the Western Balkans intrusion of sub-tropical climate further to the north, leaving coastal and southern areas very hot and dry during the summer season which is expected to have prolonged duration from near future to the end of the century, one of the key study’s finding is.

Regional Working Group on Environment as a tool

WB economies have identified priorities in adapting to climate change and mitigating its impacts and continue working with RCC on addressing the climate change and environmental issues through the Regional Working Group on Environment (RWG Env), RCC said in a news release.

The Study is a part of RCC activities in the implementation of South East Europe 2020 growth strategy (SEE 2020) within the framework of the RWG Env.

RCC-lead Regional Working Group on Environment is an intergovernmental platform aimed at coordinating important regional initiatives and projects in the area of environment and climate change.