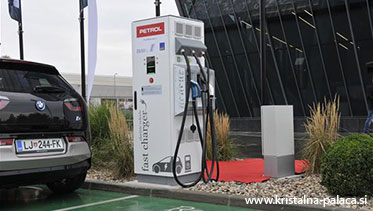 Energy company Petrol, in cooperation with BMW Group Slovenija and BTC shopping mall, activated its fast charger for electric car batteries in front of the Crystal Palace business centre on September 3. It is suitable for most electric vehicles available in the market, Slovenia Times reported.

Batteries are charged up to 80% in 20 minutes, a release from BTC said, while usual charging lasts up to four hours. The station, first of its kind in the former Yugoslav republic, includes three cables with connectors for different types of vehicles, the article said. It supports DCA-CHAdeMO, DCC-CCS/Combo and AC formats. The DC charger has the capacity of 50 kW, and the AC version has 43 kW. The government plans to install 26 similar stations at Slovenia’s highways.

Dean Herenda of the Infrastructure Ministry said that the state aims to build the network by the end of this year. There are 153 electric vehicles in the country, according to a report by TV Slovenija. According to power company Elektro Ljubljana’s data, there are over 160 charging stations in Slovenia.

READ NEXT: Lešće hydro plant got EUR 131,000 for rehabilitation