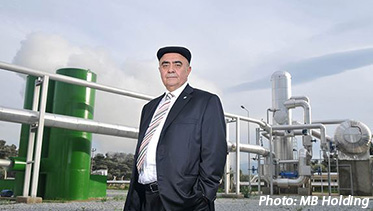 MB Holding has been awarded a contract to build a geothermal power plant with a capacity of 16.5 MW in Croatia, according to SeeNews. Turboden, Italian-based manufacturer of turbogenerators, said that in September it signed a deal with the company from Turkey which holds a permit from January to build Croatia’s first power generating facility of the kind. The facility will feature a single-axial multi-stage organic Rankine cycle (ORC) turbine designed by Turboden, the group company of Mitsubishi Heavy Industries (MHI), the statement said.

„We have selected Turboden among the possible suppliers because they will provide 10% higher revenues by means of optimized solution for our project, together with the reliability of the brand,” MB Holding chairman Muharrem Balat said.

The Velika Ciglena plant will be completed and fully functional by the end of 2016, the press release said. In May, the Municipality of Bjelovar in north Croatia where the geothermal field is located said that the first phase of the power station project is worth HRK 30 million (EUR 3.94 million). Turboden has more than 300 plants in 33 countries.