Transition away from coal by Matra Power Plant – Solar panels on ash deposits, biomass as fuel 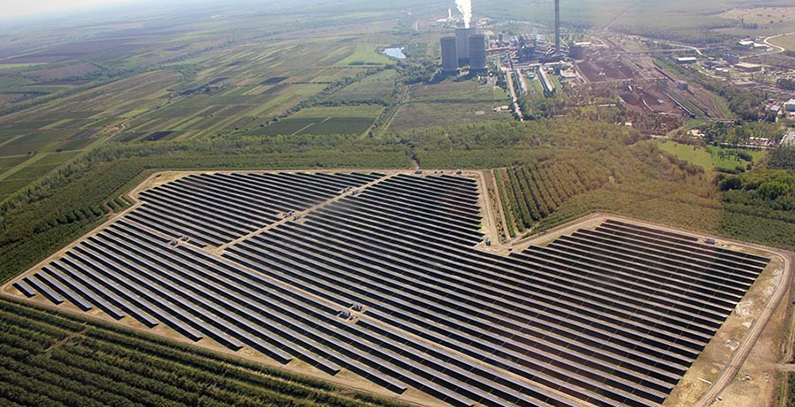 Matra Power Plant, in Northern Hungary, is an example of a coal-fired power plant preparing for the inevitable coal phase-out and transitioning into an industry cluster in which renewables play an increasingly important role.

Although there is no official phase-out date for coal in Hungary (but according to recent sources, the country is eyeing an end to coal-fired power generation by 2030), Hungarian power plants and coal mining areas must start adapting and restructuring their portfolios to the changed circumstances of the energy sector.

The question is what will happen beyond 2030, since new regulations of EU ETS set extraordinary challenges

Matra PP, with an installed capacity of almost 1.000 MW accounts for around 17% of Hungary’s electricity generation and is responsible for around 17% of the country’s CO2 emissions. Coal is extracted in mines which are Hungary’s largest lignite deposits. Thanks to retrofitting projects, the lifespan of the mines and the power plant has been prolonged until 2030.

The question is what will happen beyond 2030, since new regulations of EU ETS set extraordinary challenges, Matra PP’s Zoltan Orosz said in its presentation.

The goal was not only to retain the electricity generation capacity but keep jobs in the region, according to a case study produced by the EU initiative Platform for Coal Regions in Transition.

The concept includes the development of an industrial park in order to create a cluster partnership with established companies in a region that is considered rural and structurally weak. It is also an example of a cost-effective approach to the industrial conversion of exhausted coal mines through the use of energy forests and photovoltaics.

Matra PP has decided to exploit the potential of decommissioned mine sites for energy supply, using them primarily for biomass production and PV power plants

Matra PP has decided to exploit the potential of decommissioned mine sites for energy supply, using them primarily for biomass production and solar photovoltaic (PV). This also brings advantages to the owners of the power plant and mines, since costs for site conversion to energy forests and a solar park have been estimated to be much lower than for other uses, like agriculture or tourism.

The utilization of biomass, mainly agricultural biomass and forestry organic waste, is partly supplied by alternative resources such as solid recovered fuel (SRF) and refuse-derived fuel (RDF) as well as resources from energy forests owned by the power plant.

Regarding the energy forests, Matra PP has launched a 20 ha pilot project and has plans to expand it. In addition, in 2015, a 16 MW photovoltaic power plant (the biggest in Hungary at that time) was installed as a re-cultivation measure on an ash deposit heap within a former mining site. The solar portfolio has been further extended with the installation of a 20 MW plant in another former mining site, located at a connected mine field 60 km away. A further 20 MW will be added in the near future.

Before the installation of the 15-30 MW PV plant, the company estimated that the project could create 135-270 new jobs

Regarding job creation, the cluster strategy in the industrial park and the regional biomass use can be considered to have had (and will continue to have) a positive impact, securing long-term employment opportunities in the region. Specifically, regarding the solar PV plant, the company estimated before the installation of the 15-30 MW PV plant that the project could create 135-270 new jobs.

The total of 60 MW corresponds to 16% of the total installed national solar PV capacity. That makes the company one of the frontrunners of renewable energy utilization in the country. With the production of biofuels, it is further reducing the nation’s dependence on imported energy resources.

The availability of funding has proven to be a key factor in the success of the activities at Matra PP. The shift towards biomass and solar PV has been enabled through the national support schemes for renewables (feed-in tariff schemes and tax exemptions for solar PV). In the case of the industrial park, Geosol Kft., which provides biomass and RDF resources for the power plant, a significant amount of ERDF funding (app. 1,5 million EUR) was allocated for the company’s set up and development.

Options for the future

Different concepts in line with a decarbonization strategy exist, all of them in different development stages, either at a feasibility assessment preparation stage or the implementation stage. The concepts include: a RDF (Refuse Derived Fuel) fired combined heat and power unit, a 450 MW gas-fired combined cycle power plant unit, a 100 MW biomass unit, 600 MW pumped storage, 50 MW battery storage (connected to the solar PV plant), an expansion of the solar PV plant up to 200 MW, and a solar panel factory.