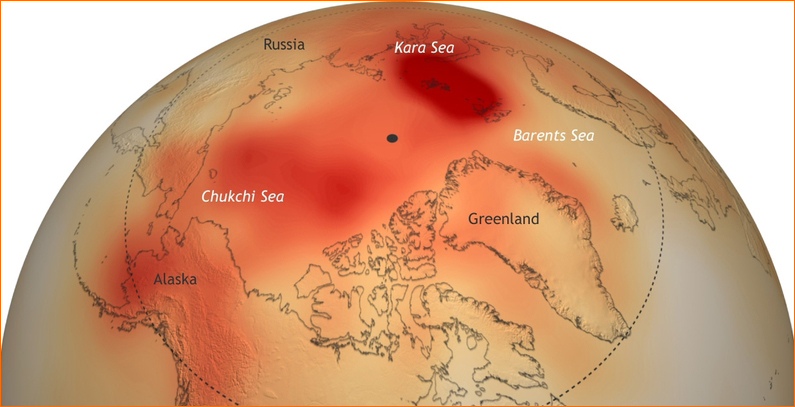 The accelerated pace Arctic ice meltdowns is hardly a surprise to the scientific community.  Yet the speed of changes taking place matches the forecasts of the biggest pessimists, at the same time becoming subject of concern in the scientific circles.

By Vladimir Đurđević, Institute of Meteorology, Faculty of Physics, University of Belgrade

The accelerated melting of the ice at the North Pole, or the Arctic, is a part of the process of “Arctic amplification” – as it is known in the scientific community – indicating a trend of  faster warming of this region compared to the global average.

With the continued rise of the greenhouse gases concentration, predominantly carbon-dioxide (CO2), all caused by anthropogenic emissions, the Earth is getting warmer in the long term. This leads to a continuous reduction in the total weight of all large ice sheets in the Arctic, Greenland and the Antarctica.

The meltdown of the Arctic is somewhat specific since the North Pole ice is located on the surface of the ocean, so when the ice melts, it results in expanded areas of the ocean directly exposed to the sun rays, thereby significantly disrupting the local balance of incoming and outgoing energy. With ice on the surface, most of the sunlight reaching the surface will not be absorbed but rather reflected back into space, because of the high albedo of the ice, a property of a matter to reflect light and other forms of radiation. On the other hand, the Ocean has a lower albedo, which means that most of the solar radiation reaching the surface will be absorbed.

In the places where the ice is melted, an open surface of the ocean appears, thus absorbing the larger part of the solar energy and increasing local temperature. The process results in even faster melting of the ice, leaving in turn more of the ocean surface exposed to Sun rays, and creating a feedback loop, which may speed up the entire process.

Besides this process, the accelerated ice melting is also facilitated by the warming up of the ocean as well as by the changes of the North sea’s circulation that allow easier flow of warm water from the south. This also contributed to the record low ice levels for the month of November.

The climatologists have predicted both the accelerated ice meltdown and the Arctic amplification phenomenon in their early works published in 1970s and 1980s. The works have dealt with global warming caused by the higher concentration of the CO2. From their perspective, the current climate change developments are not a big surprise. The warming at the North Pole is taking place at the rate twice faster than the global average. More troubling, however, is the fact that the observed speed in which the ice disappears almost perfectly coincides with the most pessimistic predictions. Moreover, this phenomenon is often used as an example to assess conclusions in the Intergovernmental Panel on Climate Change (IPCC) reports, which are seen as conservative, and are usually somewhere between the most optimistic and the most pessimistic predictions. And yet, even the most conservative predictions of further Arctic ice loss indicate that humans will witness  summers without the Arctic ice around the middle of the XXI century.

Another process closely connected to the combustion of fossil fuels, also contributing to the faster ice meltdown, is the deposition of soot. By covering the ice it prevents reflection and accelerates absorption of the heat, resulting in a faster ice melting.

Along with other processes caused by the global warming, the meltdown of the Arctic ice is an irreversible process too. Even if the greenhouse gas emissions would be cut to zero today, the current anomaly of the median global temperature and all the accompanying changes would remain effective for decades to come. The global temperature would even keep rising for some time, as some parts of the climate system are simply not “tuned” to the current energy imbalance. The main reason for this is the fact that CO2 is a highly inert greenhouse gas. The natural processes that would reduce CO2 concentration to pre-industrial levels – through “extraction” from the atmosphere and moving it into another part of climate system such as underground or a deep ocean – are very slow. The estimates say that it would take hundreds, if not thousands of years to reduce the CO2 levels to levels recorded before the industrial revolution. The Earth would require the reduction of CO2 into the atmosphere in order to witness the “recovery” of the Arctic ice.

There is, of course, a possibility that in time spans of thousands of years, mechanisms like Milanković’ cycle could prevail and allow the Arctic ice start growing. The thousands of years’ time frame is discouraging in relations to finding immediate solutions for the current problems.

The permafrost recession and the tundra expansion

The rapid warming of the Arctic poses another danger – the melting of the Arctic permafrost, the glaciated or frozen land within the Arctic Circle. The large amounts of the carbon-dioxide and methane, another powerful greenhouse gas, are set to be released due to rapid melting of the ice. This is another example of the positive feedback loop that would further contribute to the global warming. The results of the current research are still expected to give a definitive answer about the scale of the problem.

The NOAA report on the state of the Arctic in 2016 stipulates that the tundra emits more CO2 into the atmosphere than it absorbs, and that the Arctic belt permafrost contains more CO2 than the entire atmosphere of Earth contains at the moment. Another observed change is the increase in the population of small mammals such as Arctic shrew (Sorex arcticus) ever closer to the North Pole. The shrews bring with them parasites, all contributing to the expansion of ever more diverse fauna further north.

Visible changes in the Antarctic

Thirty years ago it was clear that the process of Arctic amplification would cause rapid ice meltdown at the Arctic. Also it was clear that the changes on the South Pole would be considerably different and less dramatic, at least in the first half of the 21st century. One of the most important reasons for differences in the ice dynamics between the Arctic and the Antarctica is the fact that the ice sheet in South Pole is situated mostly on the land, while he North Pole ice sheet is mostly floating on the ocean.

A recently published article reconstructed the changes in the state of the ice sheet during the first expeditions to the South Pole at the beginning of last century. It demonstrates that current levels of ice sheet are reduced for 14% compared to the ones initially measured. On the other hand, current measurements from the satellite confirm that there has been recorded a certain mild growth in its surface during last couple of decades , yet total ice volume on the South Pole is slowly decreasing.

Based on this it can be concluded that the changes have been mostly taking place as a variable following natural processes and that the global warming has not yet taken the lead in the developments on this side of the planet. Further increase of global temperature would almost certainly lead to accelerated ice melting in the Arctic, too. We hope that this would not be the case, as the international efforts and the Paris climate agreement were designed to prevent a further growth in greenhouse gases concentration and anthropocentric emissions in the years to come. In fact, a significant ice melting in the South Pole would result in the rising of median level of the global oceanfor several meters, since the major part of the ice sheet is covering the land. This would constitute one of the greatest threats to the modern society. At the same time, even the total melting of the ice in the Arctic wouldn’t pose such a significant threat, because most of the Arctic ice is already floating in the sea.