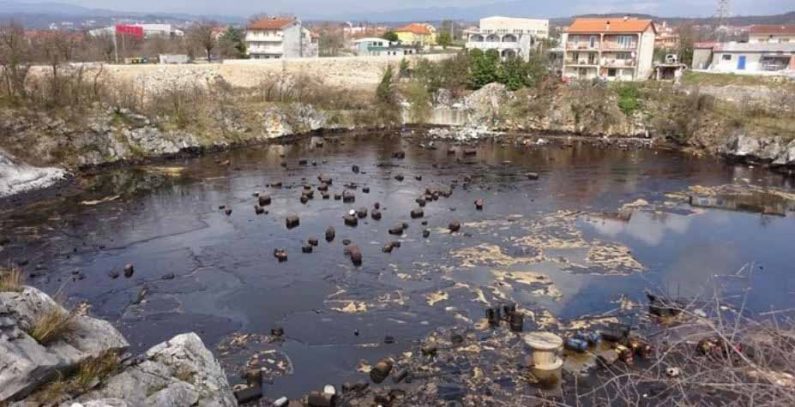 The Sovjak pit, a natural sinkhole in the karst rock holding around 150,000 cubic meters of hazardous waste dumped by the local oil industry and other companies until 1990, is a step closer to remediation after the Croatian state bodies signed an agreement securing EU funding for the project worth some EUR 50 million.

The agreement to secure EU funding for the remediation of the Sovjak pit some 6 kilometers away from the coastal town of Rijeka was signed by Croatian Minister of Environmental Protection and Energy Tomislav Ćorić and representatives of the Environmental Protection and Energy Efficiency Fund (EPEEF), which is to secure 15% of the funding, with the remaining 85% to come from the EU funds.

The works will include the excavation of floating hydrocarbons, transportation and incineration outside Croatia, the excavation of sediment/tar, on-site pre-treatment with lime, transportation and incineration outside Croatia, and complete backfill and closure with a top drainage system, according to a statement from the Ministry of Environmental Protection and Energy.

Contractor to be required to observe tight protection measures

International tendering will be launched for these complex works, which are to be carried out in close proximity of people’s homes, said EPEEF Director Dubravko Ponoš, noting that the future contractor will be required to observe tight protection measures, local media reported.

“Communication with residents will be intensified, as they will shoulder the biggest burden of the remediation project,” Ponoš said, adding that the population will be relocated if there should be the slightest health concern during the works.

The works will begin after the public procurement and the selection of the contractor are completed, in the second half of 2019 or in early 2020, and should wrap up by the end of 2023.

The Sovjak pit, which operated as a landfill for toxic industrial waste for more than 30 years until 1990, has been designated one of Croatia’s six environmental “black spots.” The contaminants it contains include oil and tar products, giving it its black appearance, while vapors are said to create a stench forcing people to keep their windows closed during the summer months.

Croatia has EUR 475 million from the EU funds at its disposal for waste management projects in the 2017-2022 period, according to earlier reports.