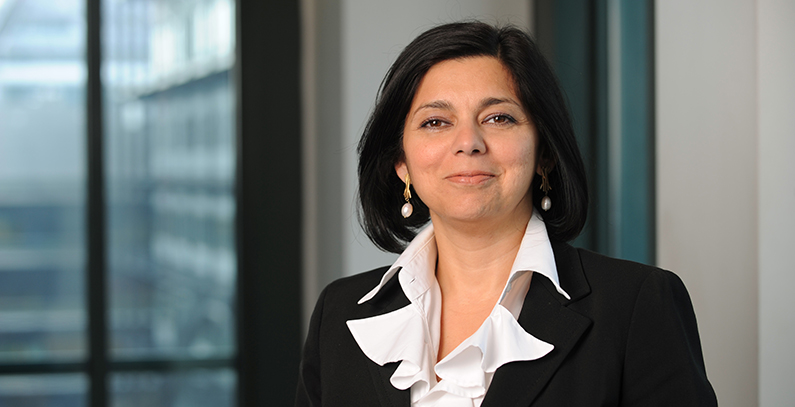 Under the framework of its Sustainable Energy Initiative, the European Bank for Reconstruction and Development funded renewable energy generation with about EUR 4 billion between 2006 and the end of 2014, says Nandita Parshad, EBRD Director, Power and Energy Utilities. In an interview with Balkan Green Energy News, she underscored the challenges coming from changing regulations and policy frameworks, including retroactive changes to support schemes for energy from renewable sources.

The bank’s business in volume and number of deals in the power sector and renewable energy projects in particular has quadrupled since 2007, when Parshad became the head of the team of 30 professionals covering 35 countries. The portfolio exceeds EUR 6 billion and annual business is over EUR 1 billion.

What is the ratio between the bank’s investment in conventional versus energy production from renewable sources?

Between 2006 and the end of 2014, it invested EUR 16.4 billion in sustainable energy and climate change projects, under the framework of the Sustainable Energy Initiative.

In many countries the EBRD has pioneered the use of renewable energy resources.

In the power sector overall, the EBRD invested approximately EUR 9.8 billion during the same period, with EUR 3.65 billion invested in thermal power generation. This included important investments in rehabilitation of existing infrastructure to make it more efficient and investments in gas fired power plants, which support the further expansion of renewable energy as flexible back-up generation.

What does Sustainable Energy Initiative (SEI) actually mean and how important is it for facilitating sustainable energy investments in the Balkans?

The Sustainable Energy Initiative is an EBRD strategic initiative, launched in 2006 in response to calls from the international community for multilateral financial institutions to scale up financing to address the global challenge of climate change.

Operationally, the SEI aimed to mainstream and to scale up sustainable energy financing throughout the bank’s projects, whether in power generation, investments in industry, municipal infrastructure or property. Since 2013, the SEI has been broadened to include projects or project components that enhance water use efficiency, waste minimization or resilience to climate change. One of the key metrics has been the percentage of the bank’s financing volume which is for sustainable energy. This has grown from 15% in 2005 to 34% in 2014, representing an average of 25%.

Since 2006 the bank has invested more in renewable energy generation than in thermal power generation.

Through the SEI the bank aims to address barriers to sustainable energy investments by integrating financing with technical assistance and policy dialogue. One such example of this integrated approach are the Sustainable Energy Financing Facilities (SEFFs). Via SEFFs the EBRD aims to assist local partner financial institutions in developing their sustainable energy business lines and reaching out to smaller-scale projects which the EBRD may not be able to finance directly.

In four of the Western Balkans countries, the EBRD has launched the Western Balkans SEFF (WeBSEFF) in 2009, to target small and medium-scale renewable and energy efficiency projects in buildings, manufacturing and generation. WeBSEFF combines approximately EUR 150 million of funding for nine partner banks in Bosnia and Herzegovina, Croatia, FYR Macedonia and Serbia, a technical assistance package of EUR 5.8 million for an implementation team who supports banks in originating and appraising sustainable energy projects, in marketing and in training activities, and EUR 24 million of EU assistance which incentivizes borrowers to prioritize sustainable energy investments.

Under the umbrella of the SEI, EBRD has also put in place a direct lending facility for renewable energy projects, the Western Balkans Sustainable Energy Direct Financing Facility (WeBSEDFF).

Alongside the SEI, EBRD also supports specific Initiatives in the Western Balkans such as the Western Balkans Investment Framework (WBIF) that supports socio-economic development through the provision of finance and technical assistance for strategic investments, particularly in infrastructure, energy efficiency and private sector development. It is a joint initiative of the EU, international financial institutions, bilateral donors and the governments of the Western Balkans.

Investment needs in terms of sustainable energy infrastructure in the Balkan region remain significant. To date, renewable energy investments have lagged behind other regions due to relatively high investment costs per kW installed, low energy tariffs prevailing in many countries, and weaker institutional capacity and regulatory frameworks. Nevertheless, EBRD has supported the Balkan region to launch a number of important projects, across the full range of sustainable infrastructure. For example, EBRD supported the Western Balkans Sustainable Energy Direct Financing Facility (WeBSEDFF), which financed over 15 projects for a total loan value of EUR 64 million. As a result of the financing provided, a total of 60 MW generation capacity from renewable energy sources is being installed, which will lead to emission reductions of approximately 442.000 tonnes of CO2 per annum.

EBRD is preparing a loan of over EUR 45 million for the construction and operation of a 72 MW wind power plant at Krnovo, Montenegro. This project is expected to be Montenegro’s first utility-scale wind farm and will be a landmark transaction in the country.

To further strengthen the energy investment climate, countries should aspire to:

What does the EBRD identify as the most challenging risks in sustainable energy projects development in the Balkan region? Is political instability in the Balkans going to influence any plans?

Policy and regulatory risks remain important issues for the development of sustainable energy in the Balkans and beyond. Over the past years we have seen regulatory changes and amendments to policy frameworks including retroactive changes to renewable energy support schemes. This has not only occurred in the Balkans but also beyond and has a significant impact on investors’ confidence to invest in renewable energy projects. The regulatory changes have, at least in some countries, been a consequence of regulators not being fully independent and as insulated from political pressures as they should be. In countries where project developers were negatively affected by retroactive regulatory changes it will likely take some time to restore investor confidence to levels seen some years ago.

In some countries, regulators haven’t been fully independent and insulated from political pressures.

Apart from the regulatory frameworks, we consider the financial solidity of the off-takers as being of paramount importance for the further development of renewable energy in the region. In countries like Albania, a recent crisis within the power corporation KESH created liquidity problems for some project developers. We therefore work together with governments, regulators, developers, international investors and local banks to discuss necessary improvements to the investment framework and share our experience putting in place sound project finance structures for sustainable energy investments.

Overall, we are very confident that there is broad political consensus across the region about the necessity to move to a lower carbon economy and stay committed to the 2020 targets.

What is the procedure for the EBRD environmental and social review? Who are the partners and stakeholders for a project?

Environmental and social appraisal is integrated into the overall project cycle and decision-making process.

EBRD partners include the clients and their advisers as well as other financing institutions that may co-finance the projects alongside EBRD. Stakeholders are clients’ employees, local communities directly affected by the project and, where appropriate, other stakeholders, such as civil society organizations, who may have an interest in the project, as an essential element of good international practice and corporate citizenship. The clients are expected to identify and analyse project stakeholders and prepare a plan for stakeholder engagement, disclosure of information, consultation and participation, and ongoing reporting to relevant stakeholders as well as have a grievance mechanism to be aware of and respond to stakeholders’ concerns.

Which renewable energy sources are the most challenging when it comes to environmental assessment?

To date, the biggest challenges associated with EBRD projects have been involuntary resettlements and potential biodiversity impacts in some hydropower projects located in protected areas. Impacts of wind farms on avifauna (birds and bats) also require thorough assessment. As outlined above, the environmental and social appraisal of some projects, especially collection of biodiversity baseline information and studies can take a long time.

International environmental groups and political institutions have expressed concerns about the impact of many planned hydropower plants, especially in Macedonia and Albania. What are the latest developments in relation to EBRD’s participation in the disputed projects and have there been any losses?

EBRD undertakes comprehensive appraisal of the environmental and social impacts of the projects and will proceed only if the potential adverse impacts can be avoided or mitigated to an acceptable level and the project are structured to meet EBRD’s Environmental and Social Policy and Performance Requirements. EBRD has approved certain projects subject to strict environmental and social conditions and is following a due process to ensure that all these conditions are met before approving disbursement of the loan proceeds for these projects and allowing any activities on the project site to begin.