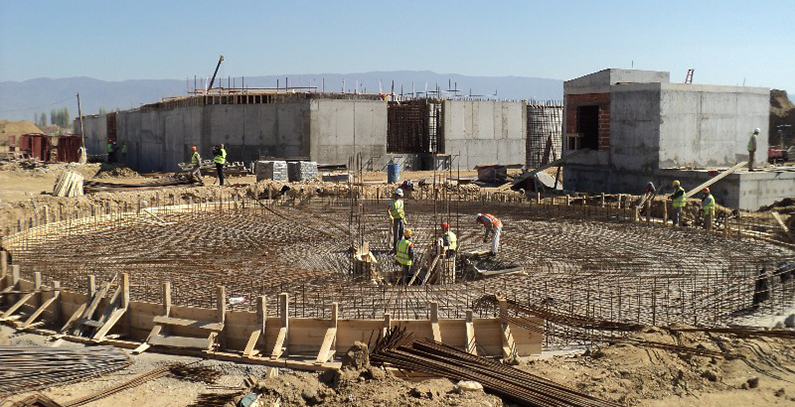 The region is well known for its production of tomatoes and peppers, and began to attract tourists in the recent years, so the local authorities hope that wastewater treatment will help them further strengthen their crucial economic sectors

Works are underway on the wastewater treatment plant in Strumica, an EU-funded project that the local authorities hope to contribute to the development of the region’s agricultural production and development of tourism.

“It’s a huge project, it takes up 5.5 hectares of land”, says Krasimir Lozanchev, the resident-engineer overseeing all construction works of the WWTP for this town in the Macedonian South-East.

Every morning about 120 workers arrive to the construction site at 7 o’clock and stay until 17. They have to finish up till September and make up a 20-day delay since work was interrupted in January due to harsh winter conditions.

“There are 15 larger buildings and several other underground facilities in the complex”, Lozanchev continues describing the project. “When it’s finished and when the equipment is installed, it will have a capacity to serve the equivalent of 55,000 people from the Strumica region, the town and the surrounding villages. It will cost EUR 6.6 million, provided by the EU through IPA, with local co-financing”.

Only 12 percent of the country’s wastewater is treated

For the Bulgarian engineer, all of this is familiar. But for Macedonia, it’s an opportunity for seeing how a modern full-scale WWTP looks like, that involves all three stages of wastewater treatment: sedimentation, aeration, and tertiary treatment, producing usable water in the end. With only 12 percent of its wastewater receiving treatment before being released in the rivers, this is an area that is yet to be developed in the country.

Three other plants are being built with EU funding, in Prilep, Kichevo, and Radovish. Several other projects have received funding from the Swiss, German, Austrian, US and other governments, and other international sources. But for now, the biggest cities like Skopje, Tetovo, Bitola or Veles, are left out of this process.

Five out of the eight statistical regions in Macedonia have between 0 and 4 percent of wastewater treatment coverage, and the Strumica area is in one of them, the South-East. Only in the North-East region the treatment exceeds 50 percent of the wastewater. Kumanovo, the biggest town of the North-East region is the only major urban area having a functioning WWTP. The others are mostly in touristy and rural areas.

Those are the benefits that the local authorities in Strumica are expecting from the construction of the WWTP. For anyone that has enjoyed Macedonian traditional foods like ajvar or shopska salad, it is very likely that the ingredients have come from Strumica. The region is known far and wide for its agricultural production, especially tomatoes and peppers. But the fact that a lot of it is irrigated from the local rivers, where untreated wastewater is dumped, could cost its reputation.

“We expect multiple benefits, especially in the agriculture, what our region is most famous for. A huge number of farmers irrigate their fields from the waters of Trkanje river, which are not suitable for such use. Therefore the plant will improve the quality of the products”, says Aleksandar Chobotarev, a representative of the Municipality of Strumica in the project implementation unit for the WWTP.

In recent years, Strumica and its surroundings began drawing the attention of tourists, mostly from the country. And it’s water and nature that brings them there, as well as a few old monasteries, and of course, good food. The waterfalls in the Belasica mountain near the villages of Smolari and Koleshino are in no way threatened by wastewaters, but the Monospitovo wetland is a different story.

“The river effluent flows into the Monospitovo wetland, which is only 10 kilometers away from this plant. The wetland is a part of Macedonia’s natural heritage with its endemic flora and fauna, and this project will significantly improve the quality of its waters”, Chobotarev adds.

The municipality is set to take over the WWTP in September, after its completion. It shall be managed by the local public enterprise.