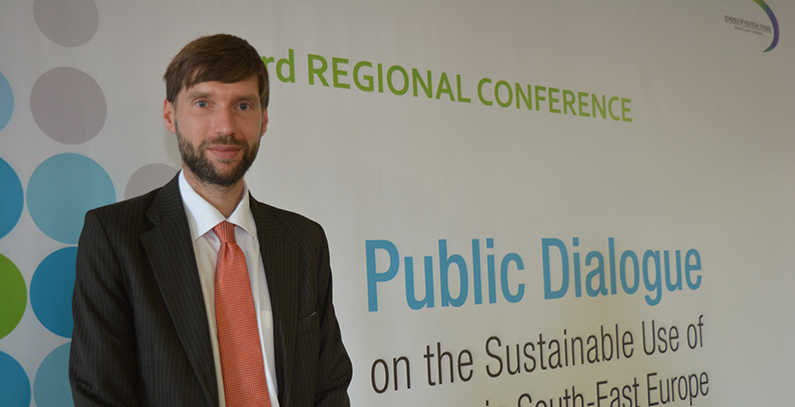 Two-day conference ‘Energy. Development. Democracy’, held at the end of September in Podgorica, Montenegro, focused on policy dialogue in the context of the partnership established between the GIZ Open Regional Fund for South-East Europe – Energy Efficiency (GIZ ORF-EE) and the Network of Schools for Political Studies in South-East Europe. Johannes Elle, the outgoing sector fund manager of ORF-EE, told Balkan Green Energy News the aim is to support parliaments, in particular the committees responsible for sustainable energy policy. “Initially, in 2009, parliamentary energy committees in the Western Balkan countries barely held meetings at all. Especially not on the topic of energy efficiency. Other stakeholders such as chambers of commerce, businesses and academia also didn’t have contact with their parliament on energy issues,” he said and stressed there is a lot of room for improvement of the work of the lawmakers’ groups.

How do you imagine the situation to develop, now that the mechanism is established?

Personally, I would like to see more selfish policy concerning energy efficiency and sustainable energy in these countries. When I say selfish, I mean tailor-made, with various positive effects for the particular country. It is not enough to just copy and paste European guidelines, as they only represent the framework to be interpreted and adapted for the benefit of individual countries. For this, substantial discussion of relevant stakeholders is necessary.

Which other entities are involved in the project?

There is the Network of Energy Efficient Capital Cities of Southeastern Europe. The cities of the network have joined the Covenant of Mayors, a movement for climate protection and sustainable energy, gathering thousands of municipalities in Europe and beyond. Most of the capital cities have made significant progress in climate protection policy development and implementation of energy efficiency measures. They have benefited from the international and regional exchange. Unfortunately, Belgrade and Prishtina aren’t part of the aforementioned network, but they are in bilateral contact with other capital cities in the region.

Furthermore, the project is also cooperating fruitfully with the Energy Efficiency Coordination Group of the Energy Community in Vienna. Responsible ministries are supported in the creation of evidence-based policies.

How did awareness of the issue of energy efficiency evolve in the Western Balkans?

In most countries, the awareness on general positive effects of the efficient use of energy has increased among decision makers and ordinary citizens. Energy efficiency is now perceived as a positive topic in general. However, very often the subject still has an image of something extraordinary, something only a wealthy country or a household can afford. Understanding that energy efficiency ideally should start with simple and relatively cheap measures saving energy and money still has to grow in the region. An efficiency measure should financially pay off through energy savings made through the measure itself. And the best energy efficiency measure is the one with the shortest payback time. Thus, I see energy efficiency as an important topic, especially when someone is not wealthy.

Do any of the countries in question have the resources to equally participate in the development of the related industry, rather than just import the technology?

The question points out a very important issue for political decision making when it comes to energy efficiency – additional positive effects on domestic economy and job creation. Some of the biggest energy efficiency potentials in all Western Balkan countries are in the building sector. Construction industry is typically dominated by domestic companies and craftspeople. Installation of energy efficient windows and insulation of façades accounts for many jobs. Furthermore, there are already companies in the Western Balkans producing or assembling energy efficient equipment related to housing – and ready to expand production. And there are more of them than one would expect.

How are professional skills picking up and are educational systems in the region adapting to the demand for trained workforce in the energy efficiency sector?

Unfortunately, this challenge is not very visible as a problem, as the existing demand is still relatively modest. While stimulating energy efficiency in the building sector successfully, Croatia is now facing the need for state-of-the-art skills. However, craftspeople and companies in a broader manner are motivated to upgrade skills of the workforce only when there is an established market. However, especially educational institutions in the Western Balkan countries should already focus on the impending needs to equip the new generations of engineers, planners, craftspersons, bankers… By the way, this would ideally also include the skills of professionals to cooperate in a multidisciplinary way. When a person is willing to invest in energy efficiency in her or his house, then he or she does not only need advice about what is technically relevant and fantastic, but also on how to finance the intended activity or product.

Did partners from countries brought together by ORF-EE learn from one another, and what forms of assistance were arranged?

Yes. We can see sharing and taking over of approaches and of know-how from one another in all the regional networks we have supported. I think mutual learning from experiences between the Western Balkan countries, which are very comparable, will thus grow even further. Actually, this kind of cross-border learning is one of the principles of the success of the European Union.

What are the typical problems for projects in the public sector?

From my experience, projects are realized when there is a persistent will to implement them. There are so many exciting, successful and highly cost-efficient project approaches in the Western Balkans – the heat and power facility in the Clinical Center of Serbia in Belgrade comes spontaneously to my mind; a biomass district heating system in Livno, Herzegovina; refurbished kindergartens and public lighting in many municipalities. Looking especially to the municipal sector, I would like to highlight that through political will, own functional capacities, cooperation of relevant stakeholders, and a good understanding of projects easy to realize, many things can be done. These ingredients are, however, often in an early development stage. Of course, investment money is also needed and many actors are complaining over the lack of own resources. Yet, expensive and ambitious projects should ideally be implemented on the basis of concrete experiences gained on smaller scale. When I look at this from a countrywide policy perspective towards the Western Balkan countries, I would like to see more national energy efficiency funds offering cheap credits for public projects or providing co-financing opportunities. Here, the Croatian Environmental Protection and Energy Efficiency Fund may be a source of inspiration.

Are you satisfied with media coverage and support for energy efficiency?

Luckily, this topic is covered by the media now more than some years ago. Still, I would be more satisfied to see a larger number of reports about successful examples on the practical level and more attention given to political decision making.

What challenges remain to meet goals for the year 2020?

Systemic progress is never easy. Many steps are needed and each step is crucial. I think the main challenge is still to get a breakthrough in the consciousness of stakeholders. More decision makers and people in the Western Balkan countries have to recognize that energy efficiency is their real interest and that, within their own scope of responsibility, many things can be done by them independently, as well as in cooperation with others. I think there is much truth to the saying “Help yourself, and God will help you” – more people have to start to act on their own and recognize their power to help themselves. When it comes to implementation, more attention should be on doing things systemically. One should be aware of the fact that a stand-alone project, under which 10 schools in one country are refurbished, is only a start. The question is rather how an efficient system in a country should look like in order to secure the refurbishment of all the schools. I am pretty sure that European partners will provide support towards the establishment and application of systemic approaches driven by the Western Balkan countries.