Serbia will hold its first auctions for the construction of wind farms and solar power plants in 2019, Miloš Banjac, assistant energy minister in charge of renewable energy sources and energy efficiency, said at a conference exploring options to increase the renewables share in Serbia’s energy mix and relevant challenges and recommendations.

The conference was held as part of the Western Balkans Energy Transition Dialogue (WeBET Dialogue), a regional project implemented by think-tank Agora Energiewende in cooperation with civil society organizations (CSOs) from five Western Balkan countries. In Serbia, the CSOs in question are the Association for Sustainable Development (ASOR) and the RES Foundation, while the entire project is backed by Austria’s Federal Ministry for Sustainability and Tourism.

Though the Serbian government extended the decree on incentives for the production of electricity from renewable energy sources and high-efficiency cogeneration in late November, the Ministry of Mining and Energy is working on the introduction of auctions for wind and solar energy facilities, according to Miloš Banjac.

“We will keep feed-in tariffs, but they will be determined in auctions,” he said.

Regulations on auctions should be prepared by mid-2019, and according to Banjac, it is not yet known how often auctions will be held and what quotas will be set.

“Electronic auctions are planned, while the quota in the first auction is planned to be tangibly large, for example, 300 MW-400 MW, so that the demand can be met, as this is the capacity of projects that have already been prepared,” said Banjac, adding that the balancing responsibility is planned to be transferred to producers.

A study on the introduction of net metering and the development of rooftop solar systems has been conducted, Banjac said.

“My proposal is to completely open up this segment and approve some form of feed-in tariffs to every individual seeking to produce energy for self-consumption and feed surpluses into the grid. Reasons for this are many, but political will is needed to adopt such a decision,” said Banjac.

“Serbia will not meet renewables target by 2020” 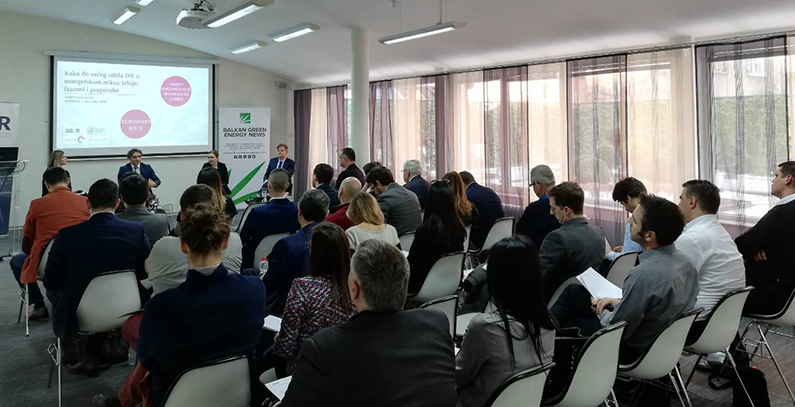 Wind farms with a combined capacity of about 560 MW and another 150 MW from other renewable energy sources – or a total of 700 MW – should be on the grid by 2020, Banjac said.

“It should be noted that 1,094 MW had been planned to achieve a renewables share of 27% in final consumption by 2020. The target will not be achieved,” he said.

Banjac went on to say that the EU is taking giant strides toward achieving a 75% renewables share in energy consumption and 95% in electricity consumption by 2050.

“This is daunting for Serbia, as it means a full-scale energy sector transformation. We are now discussing the 2030 targets within the Energy Community. What’s on the table is far from acceptable. We will seek to convince the EU it has to provide us with economic assistance if it intends to impose such targets on us,” he said.

According to him, a country with a GDP multiple times lower than the EU average and producing 70% of electricity from coal requires major funds to avert an additional adverse economic and social impact.

“The solution is either for Serbia to join the EU as soon as possible and tap into the bloc’s funds or for an agreement to be reached on how this can be done in line with our capacities,” he said.

“Coal subsidies in BiH exceed those for renewables”

Professor Mirza Kušljugić of the Faculty of Electrical Engineering in Tuzla, a project participant from Bosnia and Herzegovina (BiH), cited politics as the main risk for the development of renewable energy sources in the region.

“In the Balkans, this is a problem, as politicians do not think strategically, but can only see three to four years ahead, though this is true everywhere. However, we need to consider prospects not only for 2030, but also for 2050,” he said.

According to him, energy transition is one of the key components of the fourth industrial revolution.

“We should not carry it out because we are forced to, but because this is inevitable and it will pay off,” he said.

The professor called for preparing plans for regions dominated by coal production and coal-fired plants in order to secure new jobs.

“In a few months, a study will be published on subsidies received by the coal sector in BiH. I’ve seen the preliminary results – these subsidies are hefty indeed, exceeding subsidies for renewables. Citizen pressure will mount in BiH over pollution, that’s inevitable. This is why even China has embarked on energy transition, it did not do it over climate change,” he said.

Sonja Risteska of Agora Energiewende spoke at the panel on the strategic, regulatory, and social aspects on the renewables sector development and renewables development prospects in South-East Europe (SEE), where the think-tank is implementing the Southeast Europe Energy Transition Dialogue (SE3T NET), involving think-tanks from Greece, Romania, Bulgaria, and Croatia.

“Analyses show that energy from the planned thermal power plant (TPP) Kosova e Re will be more expensive than energy produced by wind farms and solar power plants in Germany. The problem with the region is that risks are raising the cost of energy from renewables,” she said.

For that to change, Agora Energiewende has prepared a renewables cost reduction facility.

“This facility would guarantee investments in renewables,” said Risteska, adding that the facility will likely be set up after the new European Commission is elected next year.