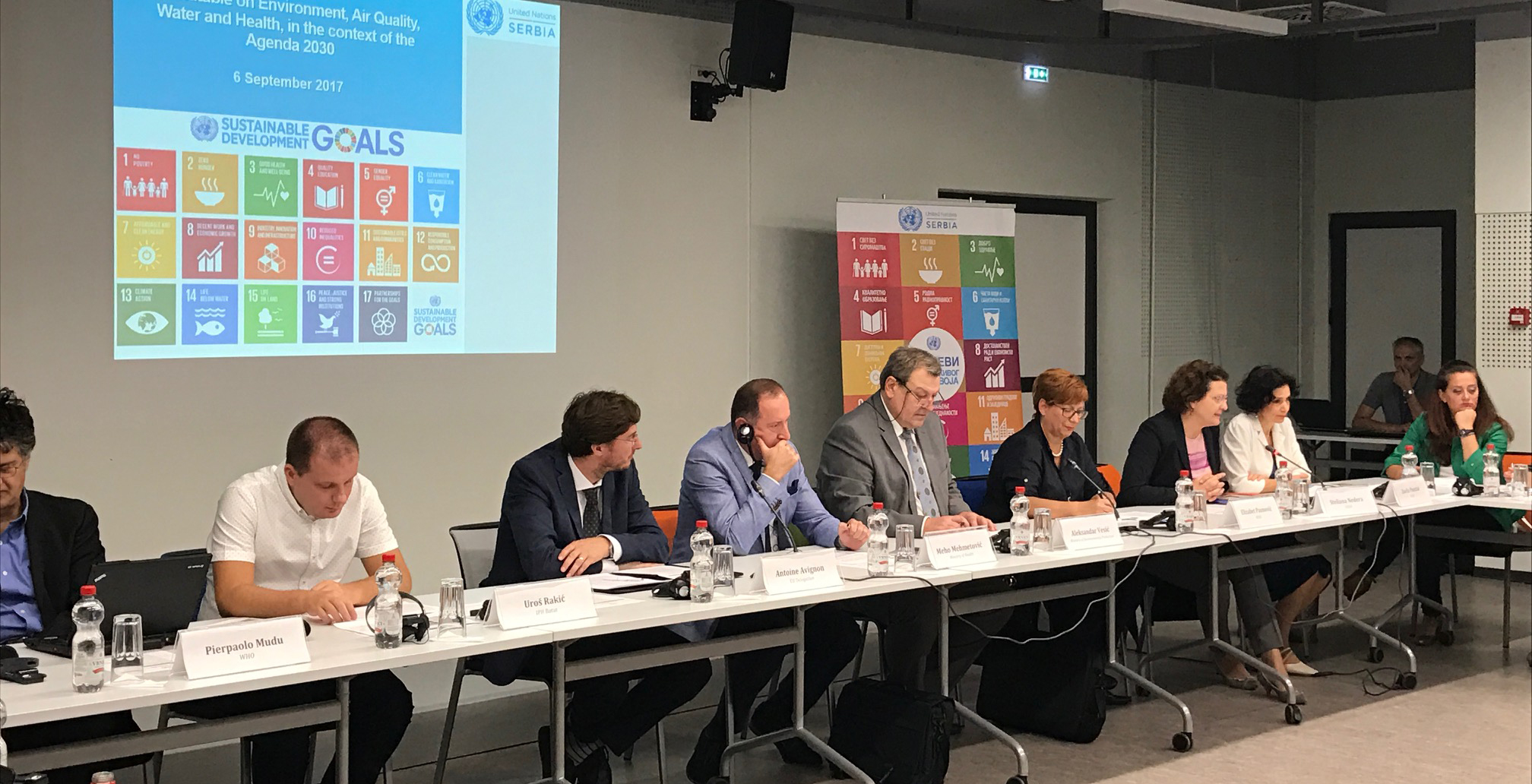 Serbia will have to work on the scaling down air pollution and securing better access to clean water in the coming years in order to improve and protect health of its population. In this endeavor it can rely on the help and support of various UN agencies as well the EU, the Round table on environment, air quality and health was told. Data shows that there is water quality gap between rural and urban areas, and that premature deaths could be directly linked to the air pollution in Serbia.

The Round table on environment, air quality, water and health, organized by the UN Team in Serbia, gathered today various stakeholders from the state institutions, international organizations as well civil society, who highlighted importance of environment protection in the context of the health, especially when it comes to the air and water quality.

In achieving its environmental goals Serbia can count on the support of various UN agencies, including UNDP, FAO, UNICEF, WHO and other partners in the Development Partnership Framework that was signed between the Serbian government and the UN Country Team for the period from 2016 to 2020 in May, 2017.

The framework foresees, among other things, cooperation and assistance in the field of environment, climate change and resilient communities, Steliana Nedera, UNDP Deputy Resident Representative, said.

“Serbia will continue to support the UN 2030 Agenda for Sustainable Development”, Assistent Minister of Environmental Protection Aleksandar Vesić said, adding that Serbia was among the first to form a body for 2030 SDGs implementation.

He added that Serbia, however, faces many challenges in the field of environment, adding that the country has good laws, but that their implementation is slow. He singled out as a problem lack of capacities in both local and central administration.

The access to clean water and prevention of waterborne diseases are among the issues that Serbia will have to tackle. State Secretary at Health Ministry Meho Mahmutović said that solving of issues like these needs engagement of all sector. “We need to work together to achieve better environmental conditions in order to protect the health,” he said.

The important instrument in this field is the Protocol on Water and Health to the 1992 Convention on the Protection and Use of Transboundary Watercourses and International Lakes. It is the first international legal agreement linking sustainable water management and the prevention, control and reduction of water-related diseases in Europe.

Serbia ratified the Protocol 2013, and in 2016 it took over presidency over it. it will preside over the Protocol until 2019.

Elizabet Paunović, Head of WHO European center for Environment and Health, said that the Protocol is one of three mandatory instruments in health sector in WHO Europe region, adding that it is ratified by 26 countries, and very much linked to the SDGs.

She said that every day 14 people die due to unsafe water supply and poor sanitation in the WHO European region. She pointed out that safe and affordable drinking water is an universal right.

Paunović also said that there is significant water quality gap between rural and urban areas in Serbia, adding that one third of small supplies in rural area showed fecal contamination.

According to the WHO estimates, more than 5,400 people in Serbia die prematurely due to the air pollution.

Reminding that the EU supports the UN 2030 Agenda and that it has adopted the Clean air policy package,  Antoine Avignone, Attaché for Environment in the in the EU Delegation to Serbia, said that Serbia has issues with air quality, naming the energy industry, steel smelters, traffic as main polluters.

He added that the EU and Serbia have been implementing many projects in this filed. Among other things, the EU has financed equipment for air quality monitoring.

Uroš Rakić from the Institutr for Public Health  of Serbia “Dr Milan Jovanović Batut” said that the analyses on the impact of air quality on human health were conducted for the period from 2010 to 2015 in Serbia, and that thew have confirmed that the emissions of harmful particles in the air directly correspond to the increased mortality of citizens.

He also singled out as a problem lack of systematic support for the maintanence of 45 monitoring stations, adding that there is no measuring continuity that will provide reliable data to asses the risk.

The representative of Serbian Environment Agency however said that the funds have been provider from budget for this year and that the renovation of the system is underway.