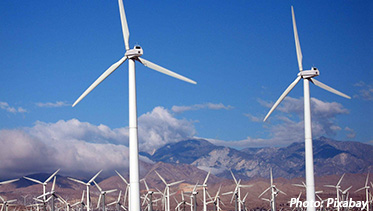 Turkey added a record high 956 MW of installed capacity last year to reach 4.72 GW, according to a report by the Turkish Wind Energy Association (TWEA or Türeb). Its president Mustafa Serdar Ataseven said 2015 was a good year for wind installations, and added that he expects additions of at least 1 GW this year. According to the report, 74% of wind farms are located in the Aegean and Marmara regions.

Balıkesir province in the Marmara region saw the most installed wind capacity, 923 MW, while Izmir ranks second with 807 MW and Manisa in the west was third with 574 MW. Turkey has 61 wind farms under construction with a total of 1.87 GW, the report reads. For the first time, unlicensed wind power was also taken into consideration. According to the report, Turkey is currently operating 10.4 MW in 14 unlicensed wind projects.

Turkey’s installed wind capacity reached 2.96 GW in 2013 and increased to 3.76 GW in the following year.