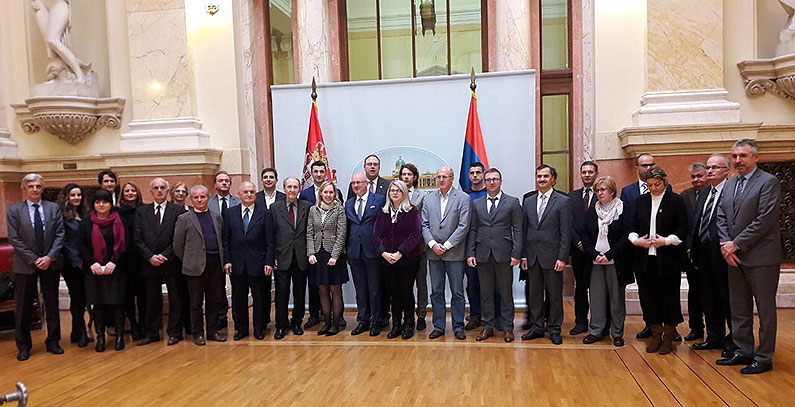 Germany has paid a great amount of money for renewable energy subsidies and this mistake should be avoided by Serbia. A good policy is also to invest in greening existing power plants to reduce CO2 emissions, Tomas Helm of the Konrad Adenauer Foundation said yesterday at the third meeting of the Serbian Parliamentary Energy Policy Forum held in Serbian National Assembly.

Member of the Parliament and Chairperson of the Forum Aleksandra Tomić said that the idea of the meeting is to estimate how far Serbia has gone in energy transition, what are the guidelines that would help the country and how to continue towards green energy growth.

Thomas Helm of the Konrad Adenauer Foundation in Kazakhstan has shared with MPs, as well as numerous non-parliamentary members of the Forum from the public companies, regulatory institutions, and the non-governmental sector, the experiences of the Kazakhstan’s and Germany’s energy transition.

He pointed out that Germany is a pioneer in energy transition, though all effort were limited to electricity generation. Nothing has been done in the building sector, although heating costs are higher than for electricity.

“CO2 emissions were reduced by 27% thanks to renewables, which reached a 29% share in electricity generation. The primary driver for the renewables was wind power. But, we made a mistake because we gave great amount of money for renewable energy subsidies. Back in 2005, we thought that the renewables won’t be able to survive in the market conditions, so we gave them high subsidies, and today the price that investors get is higher than the market one. The difference is paid by the consumers. Household prices have increased 104% since the beginning of the century, from 13 to 29 eurocents per kWh,” Helm said.

He recommended investments in renewables but also greening of existing power plants to reduce CO2 emissions.

“We are trying to do that in Kazakhstan, and Serbia should try it also. Kazakhstan produces about 63% of its electricity in coal-fired power plants, similar to Serbia,” Helm said.

Kazakhstan earned a lot of money from selling crude oil and became a very rich country, but this has changed when oil prices collapsed a few years ago, and the economic crisis occurred.

“Kazakhstan has set a target of 3% renewables share by 2020, and 30 percent by 2030. The country has the potential to produce solar and wind energy. In order to use it, a public campaign must be conducted to convince people, given that they pay very little for energy now, that this will not change when renewables are introduced,” Helm said.

As an example of Serbia’s energy transition and renewables development, Chairperson of the Forum Aleksandra Tomić named the ongoing investments.

Energy permits have been approved for 73 investors with a total capacity of 460 MW, 19 power plants reaching 491 MW have a temporary privileged power producer status, and 198 with a total capacity of 90 MW have privileged power producer status. The most permits are granted for small hydropower plants with up to 10 MW and for wind farms.

“Today we are talking about a transition to clean energy that has to be based on market prices, which is a challenge for Serbia. The energy sector will face the costs of joining the EU, and we must act now,” she said.

Rebeka Bertram, of the Heinrich Boll Foundation in Germany, said that the first phase of the energy transition in this country began in 2000 and ended at the end of last year when the second phase began.

“Citizens’ initiatives in energy transition are a phenomenon in Germany. Every 60th German citizen is a renewable energy producer. About 93% of citizens support transition because they play an active role in it. In second phase, renewables producers will not receive subsidies because auctions are introduced. The mobility and heating sector will have a much bigger role in this phase,” she said.

The Municipality of Vrbas was the first in Serbia to open Energy Management Office in 2011, even though the local authorities were obliged to do so only as of  2015.

Nikola Vujović of the Energy Management Office, who participated in this pioneering business, said that the only idea was to regulate the energy chaos in the municipality.

“Today, all public buildings have an energy passport and energy efficiency projects developed. Compared to 2010, measures that did not require a lot of money help us to reduce energy consumption 17 percent, and the annual legal commitment is 1%. The 17 percent is a benchmark for the successful energy management in Europe,” Vujović said.

The meeting was also attended by the Deputy Head of Mission and Minister-Counsellor for Political Affairs of the German Embassy in Belgrade Alexander Jung.