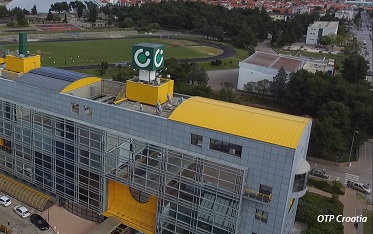 OTP banka d.d. said it is the first in Croatia using its own energy sources. The construction of solar power units in Dubrovnik, Zadar and Pula will secure a part of electricity for its buildings, according to a statement issued at the beginning of this month.

The bank headquartered in Hungary recently put the new solar power plant into operation on its building in Zadar in the Balkan country’s southern region of Dalmatia. The photovoltaic system of 21 kW was funded through a co-financing contract within a project of  the Environmental Protection and Energy Efficiency Fund for subsidizing the use of renewable energy sources. According to the statement, total value of the project is HRK 313,000 (EUR 42,000), out of which the fund provided 40%. The photovoltaic system generates power for in-house consumption like in air conditioning, lighting, information technology and lifts. The return on investment is expected within eight and a half years, the bank said.

This is OTP’s second solar power plant. A 25 kW system installed on the rooftop of Dubrovnik business centre has been in use for the past year. Investment into the facility amounted to EUR 48,000, completely funded by the bank. OTP said it also plans to construct a 30 kW solar power plant on top of the business center in Pula by next year.