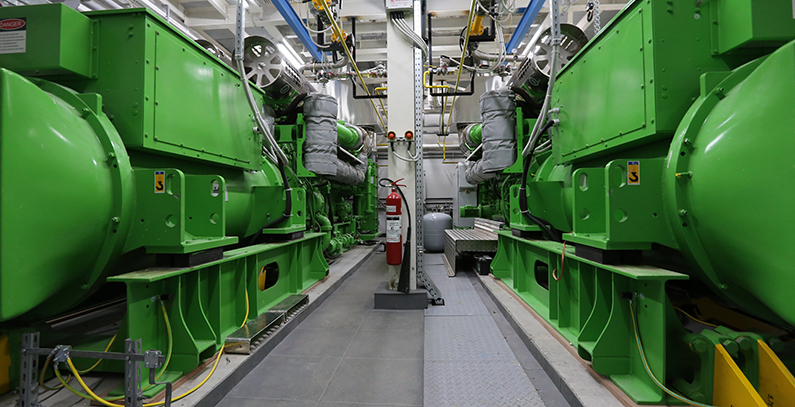 Novi Sad’s district heating operator has put in operation cogeneration facility Jug, with an installed capacity of 4 MW for electricity and 4 MW for heat, ensuring that over 50% of energy for the preparation of hot sanitary water is produced from gas engine waste heat.

The project to build cogeneration plant Jug, which cost EUR 4.2 million, was launched in 2018 as part of the implementation of a strategy for the development of the City of Novi Sad’s district energy system.

Cogeneration plant Jug, as a privileged electricity producer, will feed about 30,000 MWh a year into the grid at a preferential price

Cogeneration plant Jug, as a privileged electricity producer, will feed about 30,000 MWh a year into the grid at a preferential price. It will also deliver some 30,000 MWh of heat energy each year.

The facility will operate at its nameplate capacity 365/24/7, stopping only for scheduled maintenance.

“Cogeneration plant Zapad’s exceptional performance over the past three years is what encouraged Novosadska Toplana to build another such facility,” said Dušan Macura, head of the heat production and distribution at public heating utility Novosadska Toplana.

The entire project was implemented by applying the FIDIC Yellow Book contracting terms. An interesting fact is that cogeneration plant Jug was built on the foundations of Novi Sad’s first power station.

Novosadska Toplana decided to take such a big step primarily due to the fact that gas engine cogeneration is a high-efficiency process of primary energy conversion, while also involving a reduction of harmful emissions, which is one of the company’s strategic objectives, said Macura. Electricity produced at a high-efficiency facility is treated as green energy, which means that Novosadska Toplana will feed it into the grid as a privileged producer, he explained.

The implementation of this project is strategically important in the transition from a conventional into a modern district energy system, whose ultimate goal is to shift the benefit achieved through savings to end consumers by lowering energy prices, while at the same time ensuring funding for further investment into the system’s efficiency.

“This project is also of great significance for users of the district heating system and the City of Novi Sad, and it has made Novosadska Toplana a leader in the country as the first, and currently the only, heating utility in Serbia with cogeneration facilities in operation,” said Macura.