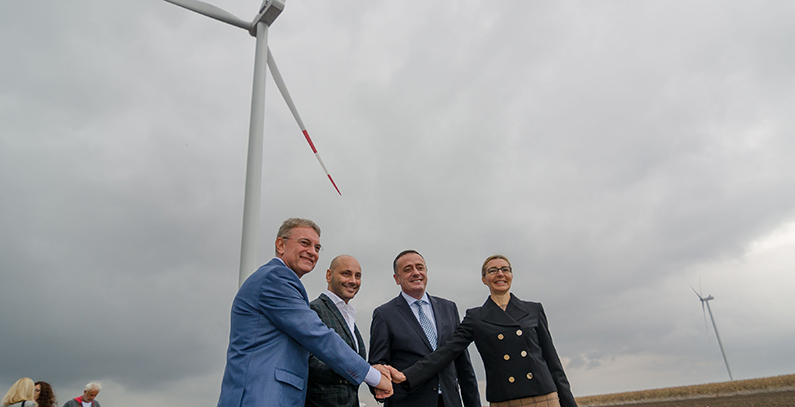 MK-Fintel Wind a.d. today launched its second wind farm in Serbia – La Piccolina. The investment of over EUR 10 million at a site in Zagajica near Vršac in northeastern Serbia has a total of 6.6 MW of installed capacity in two Vestas V-112 turbines. The company is a venture of the subsidiary of Fintel Energia SpA from Italy and domestic firm MK Holding d.o.o. and the facility was intended as a pilot project.

This is the first completed wind power plant in the area of south Banat. Construction began last year and testing started in July, after which 1.5 GWh of electricity was delivered to the grid. The Government of Serbia adopted the power purchase agreement (PPA) package one month before.

“This new investment will underline our strategic orientation towards the Serbian market. Wind power measuring at the location started in 2009. It was a pioneering endeavour at that time, and today we are delivering clean energy to thousands of local families with zero pollution. After La Piccolina and a new contract with the Serbian government for buying and selling electricity, we are planning to build another windfarm nearby,” said Tiziano Giovanneti, chief executive of Fintel Energia SpA and MK-Fintel Wind.

La Piccolina is designed to generate 20 GWh per year and provide electricity for 5,500 homes. Since the very beginning, this project had a lot of attention from many Serbian companies, institutes, universities, design offices and government institutions. The investment was partially financed with an EUR 8.5 million credit line from UniCredit Bank.

MK-Fintel Wind has opened a  9.9 MW wind farm in Kula in the country’s northwest in late 2015. The venture is now developing wind farm project Košava in Vršac of 117 MW, with a EUR 50 million investment for the first phase.