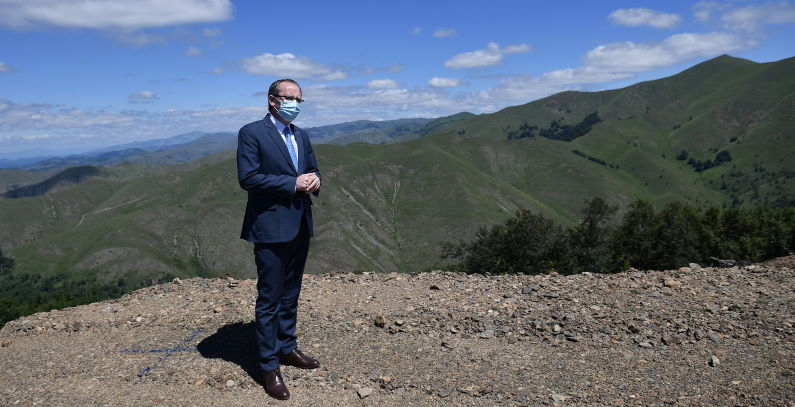 Enlight’s wind park Bajgora is scheduled to be finished in April, Kosovo’s* Prime Minister Avdullah Hoti said at the construction site during his visit with Ambassador of Germany Christian Heldt. The 105 MW project consists of 27 turbines.

Prime Minister of Kosovo* Avdullah Hoti has visited the future site of a wind farm in Selac or Seljance in the municipality of Mitrovica. The project is a joint venture with investors from Israel and Germany. Hoti said the 105 MW wind park Bajgora, under development by SoWi Kosova, is scheduled to be completed by April.

The project is funded by the European Bank for Reconstruction and Development and Slovenian NLB Bank, among others, he said. The prime minister was accompanied by Ambassador of Germany Christian Heldt.

The endeavor is a strong signal that Kosovo* is a safe destination for investment and the project has government support, Hoti asserted. He said the wind speed of nine meters per second is higher than in many parts of Germany. Notus Energy from Germany is participating in the construction of the Israeli-based Enlight Renewable Energy’s facility. General Electric is supplying the turbines.

Renewable energy has strategic importance for the country, the prime minister stressed. A 110-kV overhead power line of 19.5 kilometers will take electricity from the 27 GE 3.8-137 turbines from wind park Bajgora to Vučitrn (Vushtrri).

“The SoWi wind park will not only be the largest source of renewable energy in the country and help Kosovo* to reduce its CO2 emissions and reach its clean energy targets. With an investment sum of EUR 165 million, the project will also contribute considerably to the local economy, which is even more important during the current economic crisis caused by the COVID-19 pandemic we are experiencing globally,” Heldt said.

The government is targeting a 25% share of wind energy production capacity, while the project is currently equivalent to 10%. Bondcom Energy Point is developing the Budakova wind power plant project of 46 MW.