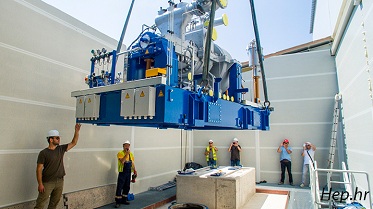 The installation of major equipment in Hep Group’s first combined heat and power (CHP) plants on forest biomass in Osijek and Sisak is complete. The start of trial operation in the two cogeneration facilities is scheduled for the beginning of next year while they are expected to obtain operating permits in the spring, the Croatian state-owned power utility revealed.

The units worth more than EUR 35 million in total will also be  HEP’s first plants of the type with the status of privileged producers from renewable energy sources and high efficiency cogeneration. The two power plants are built by a consortium led by Đuro Đaković Holding d.d. and Dutch company HoSt BV. HEP said it chose contractors on the basis of international competitive bidding conducted according to the procedure of German KfW bank, which provided loans to finance both projects.

HEP secured acquisition of forest biomass for its power plants by signing long-term contracts for the supply of wood chips.

BE-TO Sisak is located in the central part of Croatia. With 3 MW in power and 10 MW in thermal capacity, it is designed to generate 19.3 GWh and 63.9 GWh, respectively, per year. A thermal station and hot water pipeline to the communities of Brzaj and Caprag is being built as part of the EUR 18.95 million investment. BE-TO Osijek has the same capacity in both segments, for 18.3 GWh of power and 65.8 GWh for the district heating system. The value of the project is EUR 16.25 million.

Both plants will be fuelled by forest biomass and HEP secured supply through long-term contracts for wood chips. Electricity will be delivered to the grid and the installation of the two units will secure a reliable source of process steam for industry in Osijek, in the country’s northeast, as well as thermal energy for district heating systems in both towns, the statement adds.