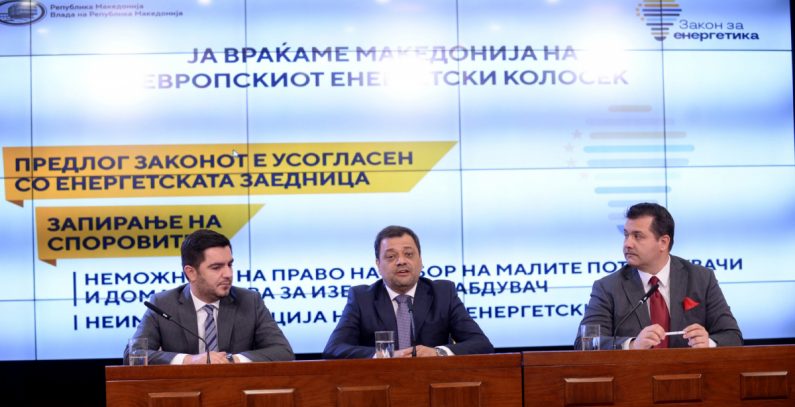 The Draft Law on Energy, which envisages full liberalization of the energy sector, will soon be submitted to the parliament, the Macedonian Government announced.

“The law will enable complete liberalization of the energy sector, so every consumer will be able to choose electricity and natural gas supplier,” Angušev said.

As he stated, the new law secures an increased share of renewable energy sources (RES) in total electricity generation, and Government’s commitment to use all available opportunities for the generation of electricity from the sun, wind and water.

Economy Minister Kreshnik Bekteshi said that the new law marks the end of the monopoly in energy sector, so small and medium-sized enterprises will have the opportunity to choose electricity and natural gas supplier.

“The law also foresees the possibility of generating electricity from the RES for self-consumption, and injecting excess electricity from on-site renewable generation into the grid for a certain fee,” Bekteshi noted.

The new law envisages the appointment of a universal electricity supplier through tendering, which will supply households at regulated price. In 2019, the state-owned power utility Elektrane Makedonije (ELEM) will be obliged to deliver 80% of the production to the universal supplier, and by 2025 this percentage will be scaled-down to 30.

The Government of Macedonia will continue to be responsible for ELEM, while the Macedonian Electricity Transmission System Operator (TSO) MEPSO will be under the authority of the Ministry of Transport and Communications, and the joint-stock utility Makedonski energetski resursi (MER) under the control of the Ministry of Economy.

Within 90 days from the adoption of the new law, a new president and two members of the Macedonian Energy Regulatory Commission will be elected.