France interested in more energy projects in Serbia, in RES in particular

Photo: Ministry of Mining and Energy of Serbia 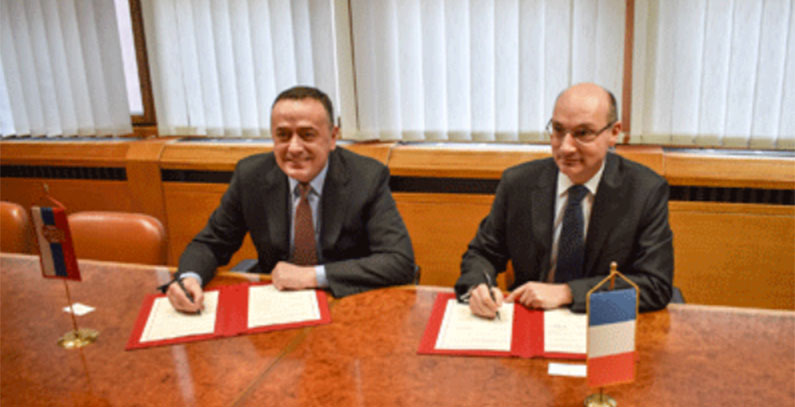 Serbia and France want to deepen their cooperation in the realization of various projects in the energy sector and with a particular interest in projects related to renewable energy sources (RES) which are focused primarily on savings and energy efficiency and improvement of Serbian distribution network.

The statement of intent regarding cooperation between Serbia and France in the field of energy was inked by Serbian Minister of Mining and Energy, Aleksandar Antić and French Ambassador to Serbia, Frederic Mondoloni at the end of last week, the Ministry announced.

The cooperation between Serbia and France in this area is already intense, and this statement of intent is to provide additional incentives for energy companies to cooperate and prepare several projects ahead of the expected meeting of the President of Serbia and France in 2018, according to the Ministry statement.

The French ambassador emphasized that the statement of intent provides a framework and impulse for improving cooperation in the field of energy efficiency, a very important area in the field of environmental protection which is of great significance for France.

“The energy sector is the sector of the future,” Mondoloni said, adding that France already had good cooperation with the Ministry of Mining and Energy of Serbia.

Both Mondolini and Antic recalled that French companies have long been present in Serbian energy sector. Schneider Electric, for example, has been on the Serbian market for 15 years.

A delegation of the French electric utility company, largely owned by the French state –  Electricite de France (EDF) is expected in Belgrade in February. EDF has already worked in Serbia as a consultant on various projects with the power utility company Elektroprivreda Srbije (EPS).

According to Ambassador Mondoloni, Serbia is the most important partner of France in the Western Balkans. “We have many projects in Serbia and we really want to help Serbs on their way to the EU,” added the ambassador.

As much as 80% of France’s trade with Western Balkan countries is concentrated in Serbia, which makes it the most important French partner in the region, Mondoloni said. Now, France wants to further deepen collaboration with Serbia in the energy sector.