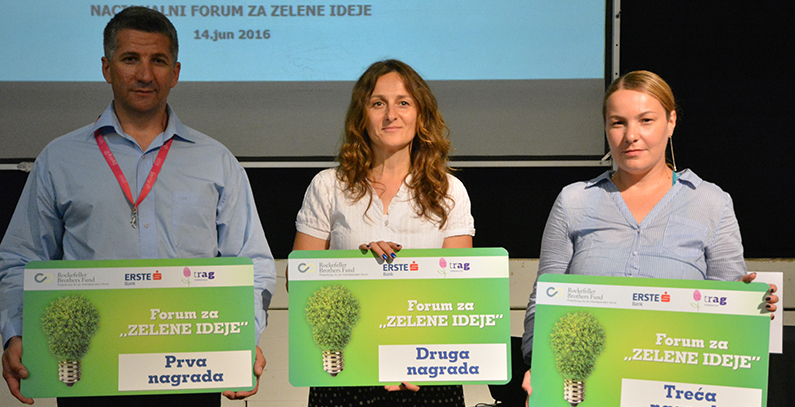 Trag Foundation, Rockefeller Brothers Fund, and Erste Bank selected three best ideas based on principles of sustainable development. The projects won USD 5,000 (EUR 4,400) each. Dragojle Božić from Užice, Slavica Ilić from Šabac and Ana Kolović from Belgrade will receive grants for this year’s business ideas within the national Forum for Green Ideas.

Nine finalists presented projects and the jury chose the best three. An additional EUR 8,800 is available for applicants at the Rockefeller Brothers Fund’s Regional Forum, which will be held from July 27 to July 30 in Serbia.

Dragojle Božić won the first prize for the launch of the production of briquettes for fuel by using biological waste from the removal of shoots in plantations of raspberries and blackberries. The second was won by Slavica Ilić for the production of healthy uncooked meals, while Ana Kolović followed, awarded for project Biowall – a modular system for vertical greening in urban conditions.

The winning ideas will also be further strengthened through consultation and mentoring, with the aim to become competitive and sustainable in the long term. This year 96 projects entered the contest.

“We are pleased that the fourth year since the competition was launched the interest, enthousiasm and the quality of ideas applied for from all over Serbia aren’t weakening,” said Biljana Dakić Đorđević, Trag Foundation’s executive director. “We find it especially important that individuals and groups use potentials and resources of their community, and they count on their work and an innovative approach to develop sustainable businesses. We believe that the ideas which were presented today, and especially the three that are awarded, will stimulate others, too, to be enterprising and to contribute to the economic and social development of their local communities.”

“Erste Bank is supporting the Forum for Green Ideas for the fourth year in a row already because we believe that the approach of entrepreneurs who give special attention to social and environmental effect on the community should be appreciated. The experiences of winners from previous years show that successful business is possible even in those frameworks,” said Vojislav Stokić, who heads the micro clients department in the bank’s Serbian branch.

Tags: NGO, sustainability
READ NEXT: Serbia to ratify Paris Agreement by middle of next year