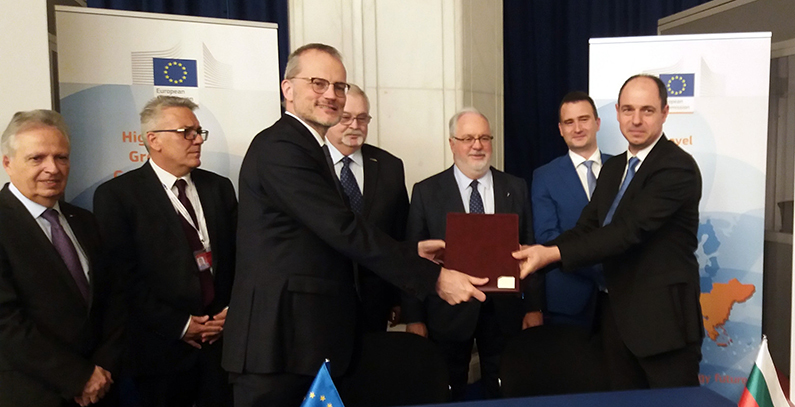 The Bulgarian Electricity System Operator (ESO) and the Innovations and Networks Executive Agency of the European Commission have signed a EUR 28.6 million grant agreement under the Connecting Europe Facility (CEF) for the construction of the Bulgarian section of the 400 kV power line Maritsa East (Bulgaria)-Nea Santa (Greece).

The agreement was signed during the VI meeting of the Central and South Eastern Europe Energy Connectivity (CESEC) High Level Group in Bucharest. The meeting has ended with conclusions and the updated Electricity Action Plan for the region.

At the end of January this year, the CEF Coordination Committee decided to grant up to EUR 28.6 million to Bulgarian transmission system operator (TSO) ESO for the second interconnector between Bulgaria and Greece.

The total cost of the project is EUR 57.3 million, and ESO will secure the rest from its own funds, ESO said in a news release.

The power line is 123 km long on Bulgarian territory and 29 km on Greek territory and has a capacity of 1,500 MW. The interconnector should be operational by June 2023.

The power line will strengthen the 400 kV grid in the region, significantly increase the possibility of electricity exchange between the two countries and support renewable energy projects in Northeastern Greece and South Bulgaria, ESO said.

According to the European Commission’s website, the meeting allowed Climate action and Energy Commissioner Miguel Arias Canete and Ministers of Energy or high level representatives of EU Member States and Energy Community contracting parties to discuss common priorities for the future on gas and electricity markets and infrastructures, as well as on renewables and energy efficiency.

In conclusions, the High Level Group has stressed the need to make rapid progress in the implementation of the electricity market coupling projects between EU Member States and Energy Community contracting parties, as identified in the updated CESEC Electricity Action Plan.