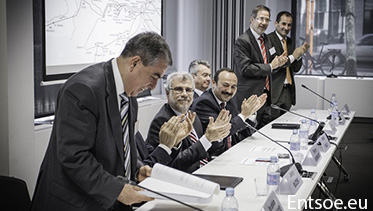 The European Network of Transmission System Operators for Electricity (Entso-E) said its Continental Europe grid, one of the largest AC synchronous grids in the world, extended to Turkey and its 75 million consumers.

„Electricity interconnection brings social welfare. This agreement means more electricity trade, more sharing of power reserves, more security and mutual help in emergency situations. All of this benefits the consumer,“ Pierre Bornard, the organisation’s chairman and deputy CEO of RTE (the French transmission system operator), said in Entso-E’s headquarters in Brussels. There the final copy of the long-term agreement on synchronisation was signed with İbrahim Balanuye and Metin Kilci, representatives of Turkish transmission system operator TEİAŞ.

„Energy Union should not be a union of 28 but a union of at least 36, including our neighbours in the Energy Community,“ added Jerzy Buzek, member of the European Parliament and chairman of Industry, Research and Energy (ITRE) Committee. Never before has there been such a legally binding contract on energy between a European organisation and Turkey, stated Janez Kopač, Energy Community Secretariat director, the report said.

„If there is no interconnection, nothing can be done on integration from the political side of things or the markets. Electricity interconnection is the foundation for integration,“ added Konstantin Staschus, Entso-E’s secretary general.

Through interconnection with Greece and Bulgaria, Turkey can import 550 MW of electricity and export 400 MW, Entso-E’s website said.