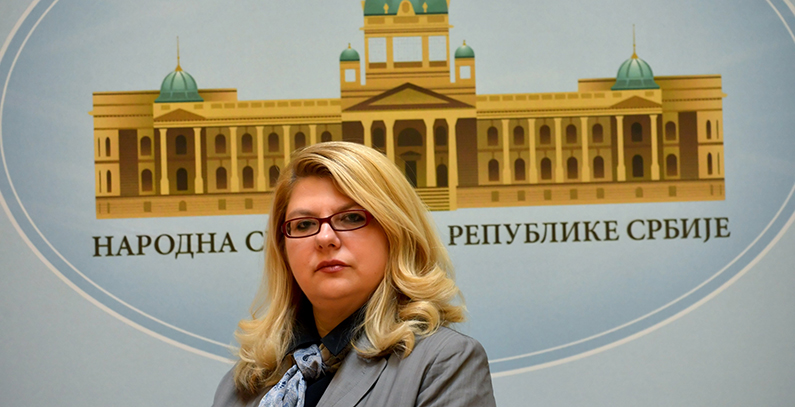 Countries in the region, and generally in Europe, have strained budgets because of economic and political difficulties, so investments in green energy can be spurred through public–private partnership, Aleksandra Tomić, President of the Committee on Economy, Regional Development, Trade, Tourism and Energy at the National Assembly of Republic Serbia, told Balkan Green Energy News. She is also the President of the informal Serbian Parliamentary Energy Policy Forum.

„Serbia doesn’t have a budget developed enough to suddenly open its capacities through feed-in tariffs and state guarantees, or the electric power system, but we can do it gradually, with a long-term, strategic approach,“ Tomić said.

How much are you satisfied with the support for green energy and energy efficiency in the 2016 budget?

Unfortunately we still don’t have a proper feed-in tariff, as funds are scarce. On the other hand, we are unsatisfied because there are still no capacities installed. I think the new legislation on spatial planning and construction solved the problems which accumulated for years. I think activities will pick up soon, as permits are much easier to obtain.

What are the main challenges and goals in the region in the policy of promoting green energy? What obstacles need to be overcome in Serbia?

Environmental protection will be a great challenge, parallel to huge investment in energy. The biggest problem to solve is the lack of interconnections in the region, and I believe the European Union is making great effort to improve the situation. State budgets are generally oriented to consolidation and public finance restructuring, so it’s difficult for the government to subsidize energy projects and support energy efficiency, when it is focusing on the social segment. This is why the state must find the balance between support for one and the other. This is also a place for a greater role of private investors, in partnership with the state. Climate change is a major challenge. Meanwhile, the migration crisis is affecting budgets across the EU, in Serbia as well. Regardless of the situation and the internal relations in the EU, all countries there and in the Western Balkans are aware they need to cooperate in energy. This matter is above politics. Energy security is a matter of life.

The Serbian Parliamentary Energy Policy Forum, which you are leading, held seven public hearings in 2015 about energy development. What progress has been made and how much did members of parliament learn about the subject?

Just by forming, better contact was established between members of parliament, as they now understand the topic has significance above party politics. Great progress has been made with the fact that they respect we opened such a non-partisan debate. Besides, they get a lot of information on developments in the sector, and greater transparency has been achieved.

The parliament got new momentum in energy issues. The civil sector was included, not only from the area covered in chapters 15 and 21 in the negotiations process with the European Union, that is energy and trans-European networks, but also the organizations which participated in preparations for chapter 27, about the environment. They routinely come to our sessions and we speak openly on both what they don’t like and what we don’t like in the country’s energy policy.

In five panels we went through all the segments of energy and the Energy Development Strategy until 2025 with projections to 2030. Propositions were heard and we changed what we saw as necessary; there were adjustments in the implementation part. All stakeholders were included: universities, companies, SMEs and the non-governmental sector.

Regardless of the situation and the internal relations in the EU, all countries there and in the Western Balkans are aware they need to cooperate in energy. This matter is above politics. Energy security is a matter of life.

The members of parliament are better informed. We gathered all interested stakeholders in the society, including some institutions which didn’t cooperate with one another or they barely did. At a time of great economic changes in the European Union and the opening of regional energy market, there was a need for organizing in the parliament in this way. The Energy Community formed the Parliamentary Plenum on December 14 of this year, and we consider this to be recognition of our work in Serbia as well.

What are the further steps related to the Parliamentary Plenum?

Its regulations were adopted when it was founded. The National Assembly of Serbia should reach a decision to form a new, official state delegation for the Energy Community with two members and two deputies, like the other countries of the region. National parliamentary work will in this way become part of the European and regional segments.

How was the forum founded?

I was following energy through the parliamentary cooperation in the Western Balkans. We established good relations with Brussels, particularly with the energy committee in the European Parliament. We saw how the political and economic situation is changing, crises erupt, like in the Middle East and Ukraine, and energy policy adapts. The EU understands that the Balkans are strategically important for energy security. Also significant are antimonopoly policy and the promotion of green energy.

Serbia doesn’t have a budget developed enough to suddenly open its capacities through feed-in tariffs and state guarantees, or the electric power system, but we can do it gradually, with a long-term, strategic approach.

The European Parliament has Eufores, its own informal group for renewable energy sources. We saw that we have to focus on solving problems from the perspectives of the committees for energy, the environment, finance and agriculture. We have full support from the Ministry of Energy. We are clear that we do not wish to do their work, and they understand it is useful to present and explain matters like the development strategy, legislation and development through our forum.

How do you cooperate and exchange opinions and experiences with the parliaments in the region?

Since 2012 we have been cooperating with the colleagues from the region, the parliamentary committees, most often the ones responsible for the economy. Regional conferences are the place to exchange experiences. We had bilateral meetings with parliamentarians from Montenegro, and there were frequent multilateral events.

Which other informal parliamentary committees and groups does your forum cooperate with?

In the National Assembly of Serbia we cooperate with the Women’s Parliamentary Network and the Green Parliamentary Group. Through the forum we included the committees for agriculture, budget and finance, the environment and administration.

The significance of the women’s group is very big, especially in the case of energy, considering there are no women heading public enterprises, while in energy they are in executive positions and have a supporting role.

How was the initiative for public hearings started? Who did you get the most support from?

We started a comprehensive dialogue as a forum about the Energy Development Strategy until 2025 with projections until 2030 with the representatives of the Ministry of Energy, the civil sector, especially the Belgrade Fund for Political Excellence (which is responsible for chapters 15 and 21 in the National Convent on EU) and we established cooperation with international organizations German Development Cooperation (GIZ), United Nations Development Programme (UNDP) as well as business associations like Economic Senate Austria and Germany and Confindustria from Italy and the deans of technical faculties in Serbia. They became our regular partners in dialogue initiation.

The forum is open to hear all the questions from them, and we tend to open dialogue very widely. There is always dissonance in public concerning legislation. We call all the sides which have disagreements on a matter. The parliament is the place where they start to communicate and work on solutions and we consider this our great success. There is also a lot of help from organizations such as the National Association for Local Economic Development (NALED) from Serbia, and the chambers of commerce of Italy, the United States, and Serbia.

Which models from the world or the region do you see as successful and potentially useful for implementation?

The best models in practice to strive for are in Austria and Italy and, when we reach a certain level, Germany. Austria is similar to Serbia by size, population structure and economic possibilities. A big share of renewable energy was achieved and development continues in that area. Germany, as the most developed state in the EU, has best models of energy policy implementation in the field of renewables and energy efficiency.

What are Serbia’s advantages in reaching quotas for energy and greenhouse gas emissions? What are the capacities in companies, in technology and education?

The energy sector must cooperate with the environmental sector. Its overall help is the only way to balance the pollution that comes from the energy sector and reach the share of renewable energy sources of 27% by the year 2020. Same goes for the reduction of pollution in transport by 10%. Education is an important segment of energy policy, and without it there is no progress for us. Therefore, this forum will start an initiative to bring together technical faculties, and we can come up with a draft law on engineering.

Since 2012 we have been cooperating with the colleagues from the region, the parliamentary committees, most often the ones responsible for the economy. Regional conferences are the place to exchange experiences.

What is the role of the civil sector and the media in the areas of activity of the Serbian Parliamentary Energy Policy Forum?

Those are the initiators; they come up with topics, or problems which maybe we don’t see as members of parliament. They are our partners in public dialogue. I have to praise those journalists who are informed on the matter and professional and active. However, these topics sometimes tend to be less interesting for the media. There is better perception when we speak about savings the people can achieve by introducing energy efficiency measures in their homes.