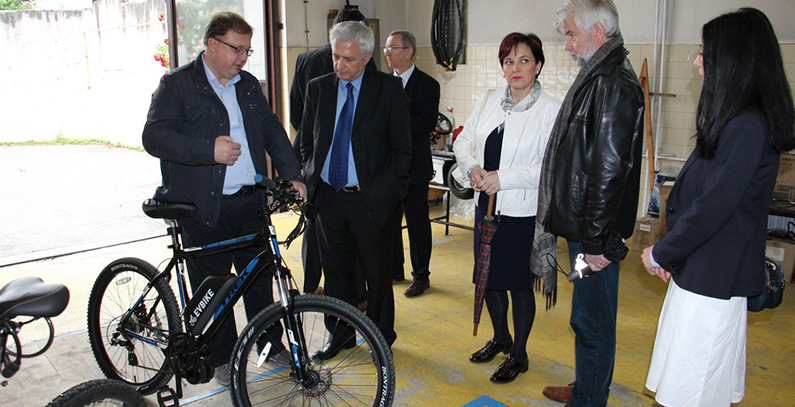 Students of the Faculty of Mechanical Engineering in Sarajevo presented on May 25 an electric car, go-kart, electric bicycles, and an air quality measurement device, as the results of the most recent scientific research conducted by this Faculty.

“This year, we received a car as a donation from Volkswagen Sarajevo, which we converted into an electric car. It is a pilot project car to be used for measuring movement resistance, consumption of power, and durability of the battery,” Prof. PhD Boran Pikula stated at the event. He also used the opportunity to highlight that the Faculty of Mechanical Engineering in Sarajevo has, in addition, developed an electric go-kart and electric bicycles.

During the presentation, Assistant Lecturer, PhD Adnan Mašić, explained that the Faculty of Mechanical Engineering in Sarajevo has also developed a device for air quality measurements with built-in sensors for the measuring of specific particles. The device is mounted on a drone and can be elevated to heights of up to 500 m. As Mašić explained “measurements so far were conducted exclusively through weather stations located on the ground, while this device enables us to measure air quality and concentration of particulate matter pm1, pm2, pm5 at different elevations and locations.“ He added that the focus is on particles which, according to the World Health Organisation (WHO), have direct negative effect on human health, especially on the human respiratory system.

On the occasion of the event, the Deputy Mayor of the City of Sarajevo, Milan Trivić, expressed his gratitude for the opportunity to witness the extensive research conducted in the field at the Sarajevo Faculty. He further highlighted that, recently, in Berlin, the City of Sarajevo signed a Letter of Intent referring to the regional project “Sustainable Urban Mobility in SEE Countries” to be implemented by Deutsche Gesellschaft für Internationale Zusammenarbeit (GIZ), as a part of its Open Regional Fund for SEE – Energy Efficiency.

Dubravka Bošnjak, GIZ ORF-EE Project Manager stated that GIZ has been active in the region for many years, especially in the field of energy efficiency. She pointed out “what we saw today, we intend to share with our partners in other countries.” She used the opportunity to also provide more details on the upcoming GIZ project to be implemented in cooperation with the cities of Sarajevo, Skopje, Podgorica, Pristina and Tirana, with support of EU partner cities Freiburg and Zagreb.

The goal of the upcoming project is to develop energy efficient, sustainable and green transporting solutions in SEE cities by transferring good practices from the EU and Germany to SEE countries, as well as by harmonizing relevant local policies with the EU 2030 Energy Strategy and the Global Sustainable Development Goals (Goal 11 – Sustainable Cities and Communities, in particular).