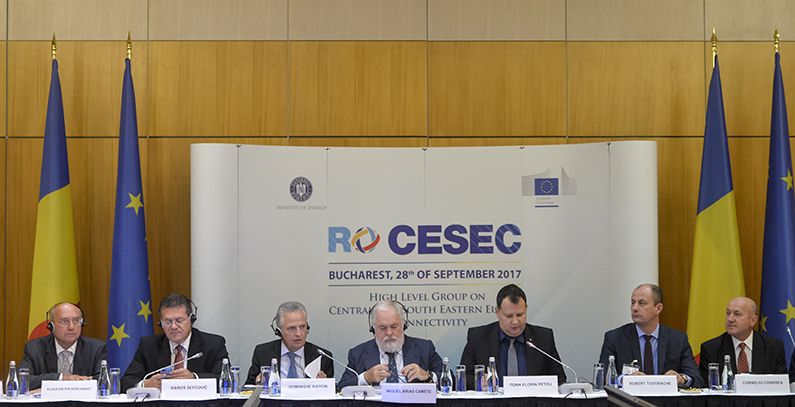 Central and South-Eastern European countries, including 9 EU Member States and 8 Energy Community Contracting Parties, have expanded their cooperation in the field of energy under the CESEC initiative to include electricity, energy efficiency and renewable energy. To that end, a memorandum of understanding was signed yesterday at the ministerial meeting in Bucharest.

Ministers of  their respective countries signed in Bucharest a Memorandum of Understanding which complements the Initiative on Central and South-Eastern European Energy Connectivity (CESEC). The initiative was launched in 2015 to enable safer gas supply in Member States in Central and South East Europe, and has been expanded further to include electricity, energy efficiency and renewable energies.

The Memorandum includes a joint approach on electricity markets, energy efficiency and renewable development. It also incorporates a list of priority projects to build an interconnected regional electricity market, as well as specific actions to boost renewables and investment in energy efficiency in a region with vast growth potential in these areas. National roadmaps for improving trading arrangements in the region were also agreed, the European Commission said.

At the meeting , goals and projects in the gas sector was  also discussed. Among other things, the Connecting Europe Facility Grant Agreement for the Krk LNG Terminal in Croatia was initialed.

The European Commission Vice-President for Energy Union Maroš Šefčovič who attended the meeting said that the cooperation under the CESEC umbrella has turned into an exemplary success story, proving that solidarity is the solution.

“Given its rapid accomplishments in the field of gas, we are expanding the scope of the cooperation in the region to electricity, renewables and energy efficiency. It will therefore cover all dimensions of this project of European solidarity that is Energy Union,” he added.

He added that further efforts will be taken to complete the energy infrastructure the region needs.

Minister of Environmental Protection and Energy of Croatia, Tomislav Ćorić, pointed out that the security and stability of the energy market in neighboring countries is important for the stability and sustainability of Croatian market. According to him, it is therefore important to share ideas and promote EU rules in those CESEC countries which are preparing for EU membership.

Minister of Mining and Energy of Serbia, Aleksandar Antić, said that the memorandum guarantees that all countries will work on the energy security not only in the Western Balkan countries, but also other countries that could have problems in the electricity supply during the year.

He pointed out that the Trans-Balkan Electricity Corridor projects are at the top of the list of priority projects. “For Serbia, it is particularly important that the EC has strongly supported the project of constructing the interconnection between Serbia and Montenegro, which is a part of the project of connecting Montenegro and Italy via underwater cable. In this way, whole region will gain access to new electricity markets,”Antić said.

With regards to renewables in CESEC countries, an assessment of the renewable energy potential in the region by 2030 and 2050 will be carried out and best practices and financing tools for the development of renewable energies will be promoted.

On energy efficiency, the focus will be on financing and the use of financial instruments to mobilize private financing as well as on ways to support the development of projects.