Photo: Ministry of the Environment and Spatial Planning 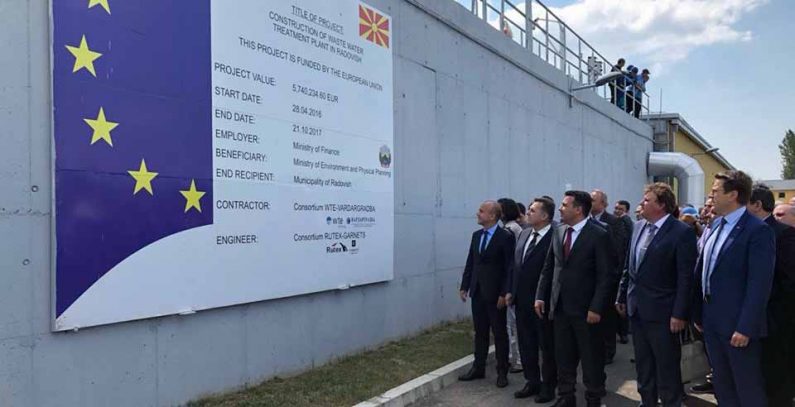 The Macedonian Finance Ministry should invite bids by the end of 2018 for the construction of wastewater treatment plants in the municipalities of Bitola and Tetovo, Finance Minister Dragan Tevdoski has said, local media reported.

A wastewater treatment plant was unveiled in the municipality of Radoviš earlier this week under a project worth EUR 6 million, according to a news release from the Ministry of the Environment and Spatial Planning.

The EU secured 85% and the municipality of Radoviš 15% of the funding to build the wastewater treatment plant, which will treat urban wastewater and help improve the water quality of the Radoviška Reka river, as well as improve the quality of people’s lives, the ministry said in the news release.

Radoviš is one of four Macedonian municipalities, including Prilep, Strumica, and Kičevo, to have received EU funding for the construction of wastewater treatment facilities. The one in Radoviš has an installed capacity for 25,000 residents, the ministry said.

As part of the Radoviš project, a 1.5-kilometer access road was built and a 3.3-kilometer secondary sewerage network rehabilitated. The unveiling ceremony was attended by a number of officials, including Macedonian Prime Minister Zoran Zaev and the EU ambassador to Macedonia, Samuel Žbogar.

Earlier in July, a EUR 9.67 million wastewater treatment plant in Prilep was unveiled as part of a EUR 23 million project that also included the construction of a 60-kilometer sewerage network. The EU provided EUR 17 million for the project in Prilep, while EUR 5 million came from Macedonia’s state budget.