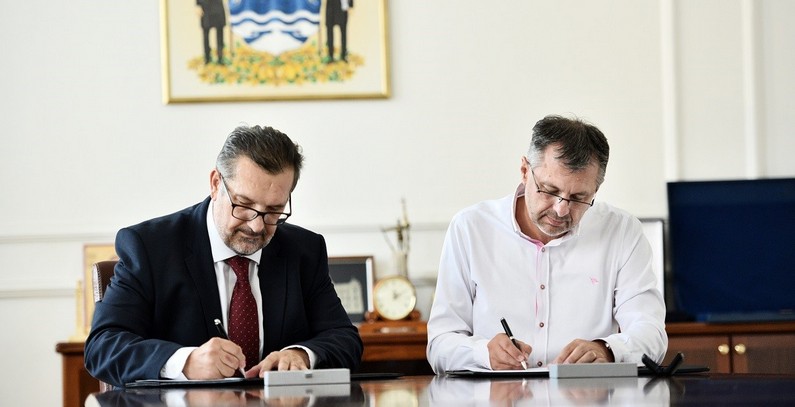 Banja Luka Mayor Igor Radojičić and the European Bank for Reconstruction and Development’s (EBRD) representative Josip Polić signed a letter of intent on August 1 concerning a loan of up to EUR 10 million for construction works on the primary and secondary water supply network, the city said in a news release.

Banja Luka and the EBRD are in talks on a loan of up to EUR 10 million, which would be extended under very favorable terms, Radojičić said, adding that he hopes the negotiations will proceed successfully and that the loan agreement will be signed in 2019.

The EBRD’s representative, Josip Polić, noted that the international finance institution has pledged to secure donor funds for the project’s technical implementation, which are estimated at about EUR 600,000.

Banja Luka already has or plans tendering procedures for construction works on certain parts of its water supply network.

At the same time, the EBRD’s representatives presented the work done so far to produce a street lighting modernization study that would involve smart city solutions, according to the news release.

“A preliminary analysis has been carried out and we are now in the phase of assessing the quantities and areas of the city where street lighting would be replaced. Based on this, the city’s potential investment would be calculated, with plans to apply smart technology solutions such as those for measuring air pollution, noise, and allergens,” Radojičić said following the presentation.

At the session held on August 6, the city’s development team reviewed sectoral policies to be included in the Banja Luka development strategy for 2018-2027, which is being drafted. The draft should be prepared by September, so that the city assembly can discuss it at the October session, said Radojičić.

“After the development goals, vision, and mission were determined, four strategic goals were defined. They include the development of a green city, involving ecological matters, environmental protection, and infrastructural development. The smart city concept is envisaged, including the modernization of various types of services, as well as the improvement of the business environment. Finally, the fourth strategic goal is the development of social services such as those referring to the health care and education sectors, sports, and culture,” Radojičić said.