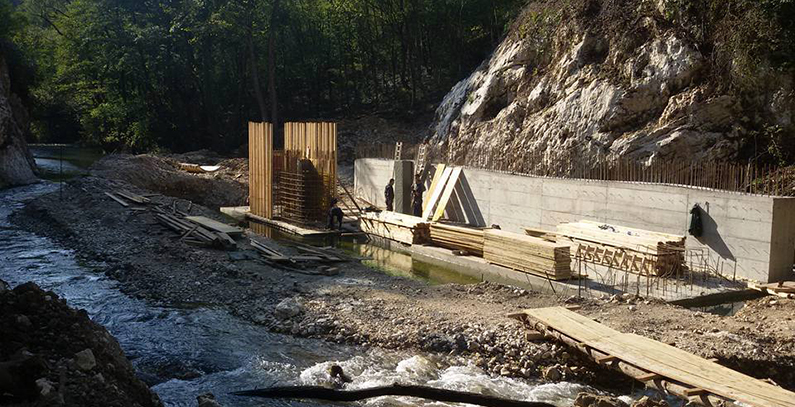 The Academy of Engineering Sciences of Serbia (AESS) has published its view on energy, environmental, and social problems arising from the construction of small hydropower plants (SHPP) with a long penstock, which represents the best overview so far of specific mistakes made by authorities since 2009, answers why the construction of such hydropower plants is not justified, the consequences of their construction, as well as suggestions what to do next.

Balkan Green Energy News brings you the key points of the AESS’ position, which was adopted by the academy’s presidency on February 21, 2019:

Having observed the unfavorable trends in the construction of SHPPs with penstocks up to a couple of kilometers in length, the AESS, together with the Spatial Planning Agency, organized a round table to discuss this topic on June 30, 2011, and adopted conclusions which are available at www.ains.rs. In late 2018, the AESS reviewed the problem again within its working bodies: the construction sciences department and two interdepartmental committees – on energy and on the environment. These reviews produced the following conclusions:

1. In 2009, when adopting the decree on incentives for the production of electricity from renewable energy sources and in the course of subsequent activities, the authorities failed to consider some very important facts:

(a) that the share of the potentials of small watercourses realized through of SHPPs is very small compared to overall consumption (around 1.5% -2%) and as such has no significant role in achieving the targets in increasing the share of renewable energy sources;

(b) the authorities failed to consider very unfavorable ecological and social consequences of the construction of SHPPs with a long penstock, which devastate the country’s major ecological potentials, dramatically disturb biodiversity, and destroy the natural potentials for the development of rural settlements on hills and mountains;

(c) the authorities did not consider the fact that water regimes of small watercourses are extremely torrential and intermittent, which is unfavorable in terms of energy production;

(d) all SHPP facilities were a priori treated as renewable energy sources, i.e. ecologically desirable sources of energy, while disregarding the fact that in a large number of cases the amount of energy produced during the entire lifespan of an SHPP is negligible and smaller than the sum of primary energy amounts used for their construction, while the greenhouse gas (GHG) emission cuts are smaller than the amounts of GHG emitted during the production of materials for their construction.

(e) since there had been no systematic measurements of water levels and flows on small watercourses, all SHPPs were designed without the necessary hydrological groundwork.

2. The Cadaster of SHPPs, which was produced in 1987, was misinterpreted (856 locations for SHPPs) and, without any critical review, was taken in 2009 as the starting point for issuing energy and construction permits, even though the documentation was produced based solely on 1:25000 maps, with no fieldwork, based on very superficial hydrological and energy analyses, and without considering the environmental and social impact.

3. Energy benefits of SHPPs are inconsiderable, and they have no impact on the strategy to increase the share of renewable energy sources in overall production.

4. The high preferential tariffs for SHPPs and the illogical sequence of issuing the permits (energy permit was issued first, while the environmental impact was considered later, or was not considered at all) led to trading and speculation in permits.

5. The responsibility to issue permits for SHPPs of under 1 MW was left to municipalities, which were incapable of assessing the actual economic benefits, and much greater losses resulting from allowing the construction of such SHPPs with a long penstock.

6. The practice of allowing the construction of SHPPs even in nature conservation areas (Mt. Stara Planina, Mt. Golija etc.) is unacceptable.

7. What is particularly worrying is the insensitivity which investors, but also relevant state authorities, have demonstrated so far towards social traumas created by investors in some rural communities.

1. Prohibit the construction of SHPPs with a long penstock in nature conservation areas as well as in basins which, due to their natural characteristics, should be covered by some form of protection in the near future.

2. Scrap, as soon as possible, the parts of the decree on incentives for the production of electricity from renewable energy sources which refer to SHPPs, because it introduces unacceptable disparities and encourages building even such SHPPs that in most cases are neither a renewable nor an ecologically desirable form of energy.

3. Project reviews and environmental impact studies may only be assigned to competent and unbiased organizations (currently, they are chosen by the investor), and not to those already “specializing” in producing positive reviews and opinions.

4. Change the methodology for determining the conditions for ensuring the environmental flow downstream of the water intake (wrongfully termed “the biological minimum”).

5. Strictly apply the legal mechanism for respecting the hierarchy of spatial planning documents.

6. In line with all of the above, review all permits issued so far for the construction of SHPPs with a long penstock, with the aim of determining the legality of the performed procedures.

7. It is surprising that the state authorities have decided that a new Cadaster of SHPPs be produced by a foreign company, to which, in this respect, Serbia is “terra incognita.”

8. It is worrying that there is a danger that the rightfully hostile public attitude towards some drastically unfavorable solutions for SHPPs with a long penstock could spill over to a large number of SHPPs whose construction is justified on all grounds as well as to potential medium- and large-scale hydropower plants.

9. This position of AESS should by no means be generalized as a position against all SHPPs.