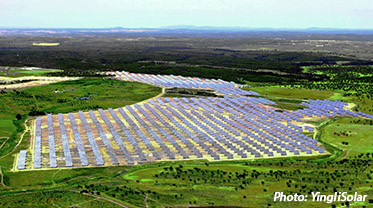 Companies from Turkey and China which developed solar plant projects of 10 MW across four sites on 18 hectares now move on to additional facilities of a total of 10 MW, which they expect to complete by the end of 2016. The initial investments in western Turkey are underway and construction is expected to begin in the second quarter of next year, said Yingli Green Energy Holding Company Limited. The solar panel manufacturer stated it joined forces with Motif Proje İnşaat Ltd. Şti., a consulting partner.

“Turkey is an extremely promising market for solar project development due to its growing demand for electricity, large population of over 75 million people, and high levels of solar irradiation. There are currently 200 MW of photovoltaic projects under construction and additional 5 GW under application in Turkey,” said Anian Schreiber, country project manager from Yingli Green Energy Europe GmbH. “With the support of Motif Proje, we can rapidly scale our development activities in this high-potential market.”

The company also known as Yingli Solar covers the chain from ingot casting and wafering through solar cell production and solar panel assembly. Headquartered in Baoding, China, Yingli Green Energy has more than 30 regional subsidiaries and branch offices and has distributed more than 14 GW solar panels to customers worldwide, the press release said.

Motif Proje was founded in 1995 in Turkey as one of the first consulting partners for renewable energy and has established a specialized engineering company. Motif Proje has already successfully developed over 20 MW of projects across Turkey and continues to explore the promising license-free sector for projects of less than 1 MW, according to the statement.