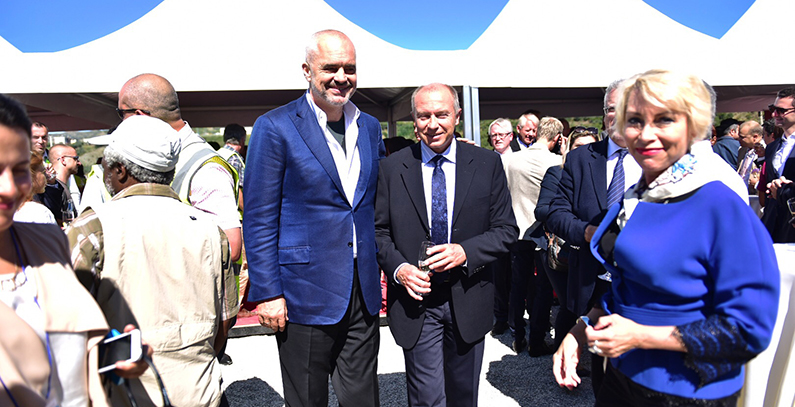 Statkraft officially opened 73 MW hydropower plant Banja on Friday, September 23. It is the first of the two hydropower plants by Norwegian company in Albania being constructed as part of the 256 MW Devoll hydro power project due for completion in 2018.

Power stations, Banja and Moglicë, are located on the Devoll river, in the valley of the same name, around 70 kilometres southeast of capital Tirana.

“This investment is a great example of the private interest and the public interest meeting at the same point. In this area alone, over 100 km of roads have been built, with some great engineering efficiency. Banja-Gramsh road has 14 bridges and one of the bridges, 520 meters long, is the second-longest bridge in Albania. Statkraft is an example to be followed by all other companies investing in Albania,” Prime Minister Rama said at the opening ceremony.

In his speech at the opening ceremony, CEO Rynning-Tønnesen praised Albania for developing renewable and climate friendly hydro power, and also underlined the importance of completing the market reforms, deregulation and the creation of a power exchange in the country.

Banja hydropower plant will generate around 255 GWh renewable electricity per year. The plant consists of two main units, as well as an eco-flow unit utilising even the minimum flow for renewable power production. The dam above the power plant is 80 meters high and creates a 14 square kilometers reservoir, in the form of a new lake in the beautiful Devoll valley.

As Balkan Green Energy news reported earlier this year, Statkraft hired Multiconsult, Norwegian engineering and design firm, for providing contract staff and for consulting services in the closing phase of the construction, and the filling of the Banja reservoir was launched on April 15, 2016.

In addition to the dam, the power station and the transmission line, the construction also includes new roads, and measures linked to following up the social and environmental aspects of the project. Based on international standards, Statkraft is committed to ensure that all affected parties are as well or better off after the project than before. Hence, the project has also contributed to new houses, school, new agricultural activities, afforestation as well as garbage- and sewage treatment facilities.

When finished, Devoll-project with 256 MW installed capacity will increase the power generating capacity of Albania by 17 percent.

The construction of the Moglice (183 MW) hydropower plant is ongoing, planned for commercial operation in 2018. Even this part of the project reached a major milestone this week, as the river was diverted from the dam site, making it possible to start dam construction.

The total investment of the Devoll project is estimated to approximately EUR 500 million.