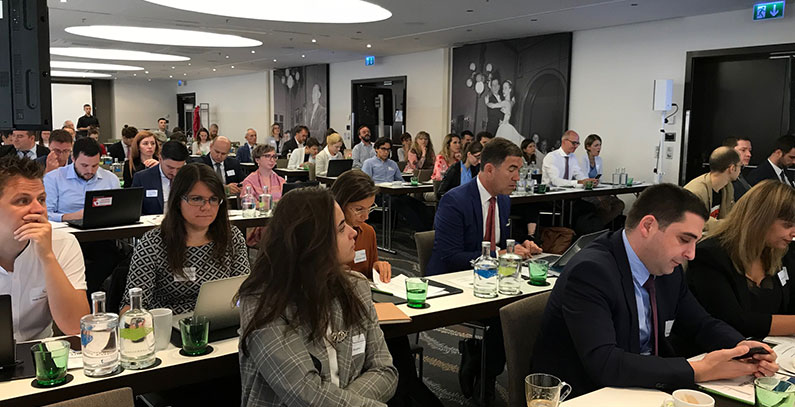 The second Sustainability Forum took place on June 22 in Vienna, gathering more than 120 participants from a multi-stakeholder environment actively engaged in the process of the energy transition of the Energy Community’s contracting parties. The Forum’s participants agreed that energy transition has already started bringing new models into focus of the energy sector development, at the same time discussing the best ways to shape the energy and climate policy in the Energy Community through an open and inclusive dialogue.

In his opening speech, Janez Kopač, director of Energy Community’s Secretariat, welcomed all participants and sent a powerful message on the side one can take in the process of the clean energy transition: “Energy transition will have its winners and losers. Let us approach it so we are the ones who win.”

Dragana Mileusnić, Southeast Europe programme manager at the Nature Conservancy, said that the dialogue between civil society organizations (CSO) and ministers on energy transition and climate change was almost unimaginable several years ago. “This format of the Sustainability Forum proves that we are well advanced today and stakeholders are open for communication and cooperation making meaningful synergies,” Mileusnić said.

New clean energy and climate targets for the whole EU

With the new overall goal recently adopted by the European Commission, for 32% for renewables to be reached by the entire EU by 2030, up from the previously announced 27%, the next step would be to determine individual goals for all EU member states, but also for the Energy Community contracting parties. New energy efficiency targets are also expected to be announced in the coming days. With new milestones already in place or expected, the Energy Community is clear that the focus of its work and cooperation with contracting parties in the near future has to be on establishing a new climate and energy framework until 2030.

“After the Large Combustion Plants and Industrial Emissions Directives entered into force earlier this year, the Energy Community Contracting Parties must focus even more on the clean energy transition, including the adoption of the climate acquis, the preparatory steps to integrate energy and climate plans and the establishment of a rigorous, streamlined and inclusive process to set overall 2030 targets,” reads the EnC’s statement distributed to the Forum’s participants.

Irina Lazzerini, sustainable energy expert at the Energy Community’s Secretariat, made a good point in providing an answer to the question of what is necessary to scale-up and accelerate the energy transition. Lazzerini identified three cornerstones of energy transition: the first one is political support, since policymakers have to accept and embrace the change, providing a clear regulatory framework and committing to the 2030 targets and beyond in order to provide a long-term perspective. Without political commitment and goals ahead, risks and uncertainty will remain too high and investors will hold back, Lazzerini noted.  The second relates to the shift from a logic of scarcity, linked to fossils fuels, to a logic of abundance: “We should focus on how our energy system will deal with all the extra energy produced by renewables, how the energy system needs to necessarily evolve. Also, we should look at which are the main implications for electricity markets when a growing share of variable RES enters the power mix,” the expert said.

And the third cornerstone deals with citizens, who are to be put in the center of the energy transition and ensure a balanced mix of participants in the energy market. Explaining the process of energy democratization, Lazzerini said: “Not only big actors, through auctions, but also citizens, communities, municipalities, small business with small projects which are easier to be built and integrated in the grid, encounter almost no public opposition, and reduce distribution system loss. Also, there should be increased support to self-consumption.”

Megan Richards, Director of Energy Policy in DG Energy (ENER) of the European Commission, explained that the EU increased its 2030 renewable energy targets due to a dramatic reduction of costs. “EU member states are to create their energy and climate long-term plans. By doing this they will provide investors with long-term perspective, which is very important and necessary.” Richards also emphasized the importance of public consultation on long-term strategy and achieving industrial transformative change until 2050 and said that multi-stakeholder discussion is necessary if the EU wants to achieve industrial transformative change until 2050.

Richards also addressed the challenge of translating new EU goals into the goals of the Energy Community contracting parties, since their regulatory frameworks vary.

Does the auction model leave room for feed-in tariffs?

The Energy Community contracting parties are approaching the end of the 2020 target cycle. In parallel, the contracting parties will be required to define new individual clean energy and climate targets, while auctions are to be introduced as the model of supporting renewable energy sources. At the moment, the countries are considering available options to follow recommendations by the Energy Community. Some are opting to keep feed-in tariffs, while some, like Macedonia, have been working on the preparation of auctions. Addressing the Forum, Macedonian Economy Minister Kreshnik Bekteshi, whose portfolio includes energy, announced auctions for 200 MW of solar and 100 MW of wind capacity in his country in the near future. The minister also informed his peers and CSOs’ representatives that Macedonia is in the process of passing implementing regulations following the recent adoption of the Third Energy Package. This will, according to him, help Macedonia fight dependency on energy imports, which account for 70% of the country’s energy consumption.

Though the picture is still not completely clear about the mechanisms of applying feed-in tariffs, feed-in premiums and auctions, it could be heard that the auction system does not abandon feed-in tariffs but, on the contrary, leaves room for countries to keep this model running, albeit under the auctions framework. Energy Community experts underline that the new model would be financially better and would make renewables cheaper for end consumers, since auctions are won by bidders with the lowest offers.

Energy poverty still a major challenge for the region

The Forum took note of the fact that energy poverty continues to be a major challenge in the Energy Community contracting parties and must be one of the key considerations in the transition towards low-carbon power systems. The participants stressed the importance of contracting parties joining ongoing EU initiatives supporting tailor-made energy transition strategies, including the Coal Regions in Transition Platform and the EU Energy Poverty Observatory, to enable a shift that is not only sustainable but also fair for those who stand to lose out.