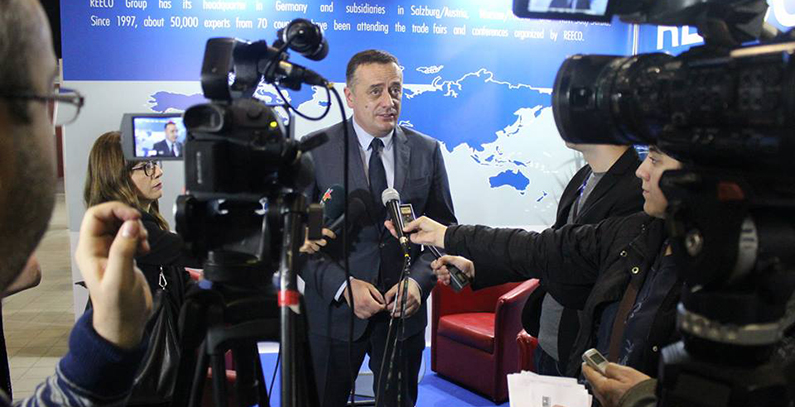 Minister of mining and energy Aleksandar Antić inaugurated 4th RENEXPO WATER & ENERGY international fair. Antić said that Serbia has been investing EUR 10 million for energy efficiency refurbishment of 54 public buildings so far. The fair is organized by REECO Group, the branch of German company specialized in promotion of sustainable energy and environmental protection.

REECO Group CEO Johann-Georg Röhm said at the opening ceremony that 100 exhibitors from 15, mostly European countries, participate in this event. Röhm is expecting approximately 1.500 visitors on the fair and 400 more on expert conferences.

According to Antić, Serbia has serious plans to better exploit its biomass potential, which makes 60% of total renewable energy potential in the country. “German government has provided EUR 22 million, and Swiss government EUR 5 million to facilitate  replacement of fossil fuels with biomass”, Antić said.

Head of the EIB’s regional representation for Western Balkans Dubravka Negre confirmed that her Bank will continue to finance environment protection and water management projects.

“EIB invested EUR 300 million in the Western Balkans water and sewerage projects and EUR 400 in transmission networks. The plan is to invest EUR 800 million on yearin the next three years for different sustainability projects.”

Djordje Popović from CMS law office said that both renewable energy and energy efficiency projects are not easy to be implemented, even in the developed countries where this model was originally introduced. Therefore, only good practices and unobstructed regulations enable projects’ implementation.

Nora Gombar from U Light, the company which conducted two successful projects of public lighting reconstruction through the private-public partnership (PPP model) in the municipalities of Ada and Žabalj, said that legal framework in Serbia is better than the ones in Hungary and Slovakia, but also emphasized that such projects often encounter obstacles. Gombar said that ESCO companies are obligated not just to prepare projects, but to avert local authorities’ fear to launch them.

RENEXPO 2017 will last for three days, until April 27. Official partner-country this year is Netherlands.