Photo: Blockade on the construction site (Coalition for the Protection of Rivers in BiH) 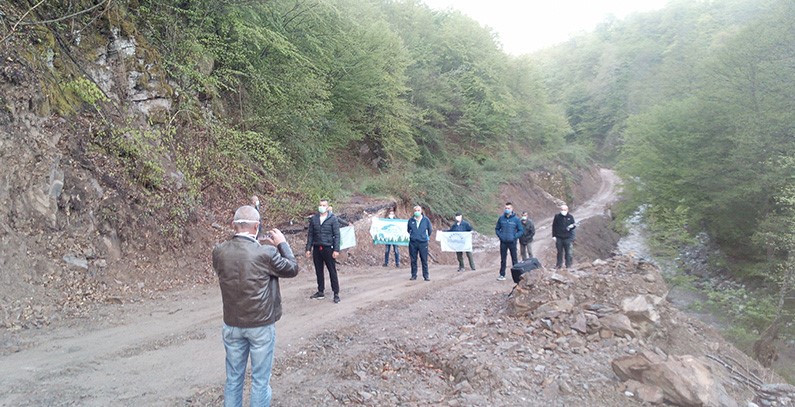 Despite a ban on gatherings due to the coronavirus, residents of Foča blocked the construction of small hydropower plants (SHPPs) Bjelava and Mala Bjelava.

They are two out of the five SHPPs that are being built in Bosnia and Herzegovina at the time of lockdowns introduced to slow the spread of the COVID-19 infection.

Representatives of the Coalition for the Protection of Rivers in Bosnia and Herzegovina have joined the blockade. There were two dozen residents. Together they managed to stop workers attempting to continue illegal activity, the coalition said in a press release.

“We grew up here and this river raised us. We have learned to swim here and want to prevent further destruction of our environment,” said resident Miloš Vujičić.

According to the statement, Foča-based Srbinjeputevi has conducted illegal construction of two SHPPs, prompting the locals to revolt because it has started in a situation when the movement of citizens is restricted, public gatherings are forbidden and activities of the inspection are hindered.

Locals were supported by other groups fighting for the conservation of rivers, such as civil society organization Eko centar from Višegrad. Its president Dejan Furtula said the works are a violation of all rights and a major crime against nature and humans.

A criminal complaint has been filed against a company building SHPP

The Coalition for the Protection of Rivers in Bosnia and Herzegovina has submitted a request for insight into environmental, construction and urban permits to the Ministry of Spatial Planning, Construction and Ecology of the Republic of Srpska.

For two SHPPs, the procedures envisaged by the environmental protection law and the the Law on Spatial Planning and Construction were not conducted

The ministry said the procedures envisaged by the Law on Environmental Protection and the Law on Spatial Planning and Construction were not conducted for these two power plants. Afterward, the coalition decided to file a criminal complaint against the firm.

The coalition also demands an urgent inspection of the works on the Bjelava and Mala Bjelava rivers from the Republic of Srpska Inspectorate.