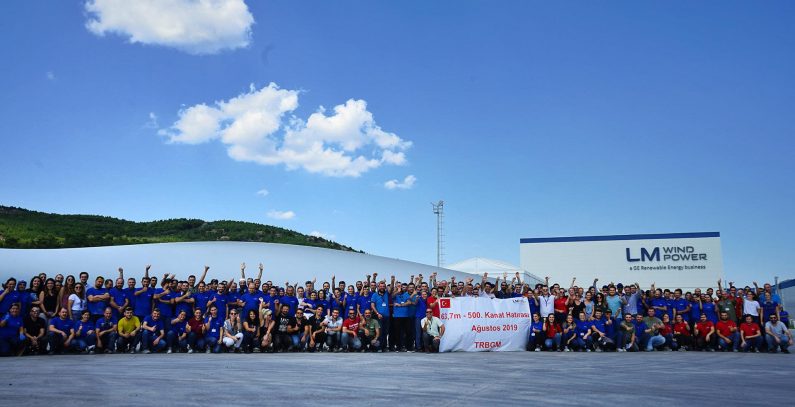 “Devoted to responding to the growing demand for wind energy worldwide – including in Turkey, Europe and Asia – the 500 blades produced so far in Bergama are meant to capture the wind for a total capacity of about 500 MW. That’s enough blades to power the equivalent of around 680,000 homes in Turkey!,” reads a press release from LM Wind Power.

Inaugurated in July 2017, the Bergama facility became the 15th LM Wind Power factory and the first opened after the company became a GE Renewable Energy business. “The Bergama factory represents a USD 50 million commitment to Turkey, and in 2019, we decided to invest another USD 30 million by the end of the year to extend the facility and recruit 300 new employees,” LM Wind Power said.

Approximately 95% of new hiring is blue-collar workers and the remaining 5% is primarily engineering positions.

“We are seeking employees working in the field of grinding and composite materials who have used manual skills in their previous work. After employees start to work, they will receive training in our ‘Center of Excellence’ in a six-week training course consisting of fix modules. In addition to engineering positions, we prefer industrial and mechanical engineers,” the company said earlier in an emailed statement to Balkan Green Energy News.

READ NEXT: Environmental protection fee in Serbia now calculated based on pollutant emissions