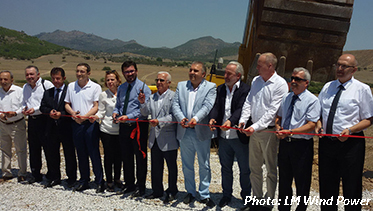 A facility in Bergama Organized Industrial Zone (BOSBI), set to start production by the middle of next year, is designed to produce enough wind blades for the capacity of 500 MW per year, with an option to raise it to around 2 GW.

LM Wind Power, the world’s largest manufacturer in the segment, broke ground at its 17 hectares of land in Bergama in Turkey’s west. The project is expected to create 450 skilled technical jobs, the Danish company’s statement said. They will range from manufacturing operations, to technical engineering, services, administration and ancillary support.

Vatansever: The event marks the beginning of a new hub for green industry.

The event marks the beginning of a new hub for green industry, which signals a prosperous future for the zone, the city of Bergama, for Izmir and for the wider Turkish economy, said Hüseyin Vatansever, president of BOSBI.

“In addition to the obvious geographical and logistical benefits this region presents, there’s a noteworthy local talent pool which can benefit from the opportunities. LM Wind Power has an excellent track record for growing and retaining local people from the communities wherever we operate,” said Ben Malefijt, LM Wind Power’s vice president for industrialization.

The investment is supported by commitments from a major customer, the company said. The new plant will be LM Wind Power’s fourteenth.