Is PPP an effective tool for implementing energy related projects? 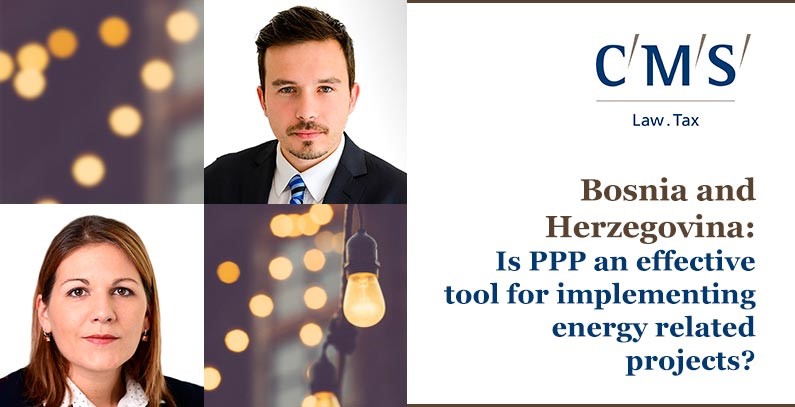 Trying to find your way through public-private partnership (PPP) legislation in Bosnia and Herzegovina (BiH) may seem like navigating a maze. With 12 different laws at multiple levels of government, all quite similar yet none the same, the situation often seems confusing. One cannot help but wonder whether PPP is an efficient tool for implementing already complex energy projects.

Thanks to the complex constitutional structure of BiH – with state level authorities, three administrative units (Federation of BiH (FBiH), Republika Srpska (RS) and Brčko District (BD)) and a further 10 cantons in FBiH, each with its own legislative competences – PPP is today regulated by 12 different laws, accompanied by a swathe of secondary legislation. These laws can be effectively divided into two sets – one unhelpful as it relies on public procurement legislation, and the other envisaging viable contractual and institutional PPP, reflecting the principles and structures tested across Europe and further afield.

The common denominator for the latter set is the following group of regulated features (with the proviso that certain regulations may differ in RS and FBiH):

Although the PPP structure still poses significant unknowns to the public authorities, the interest in these structures is evident. There are many activities undertaken by the NGO sector, international players and finance institutions to promote PPP as a tool for improving infrastructure projects, with a focus on energy projects whose popularity is on the rise. Many of these activities are directed towards educating the potential public partners on how to use PPP for developing public interest projects while simultaneously incentivising the private sector.

Due to the low level of awareness and complex legislative environment, only two projects on the market can be categorized as PPP projects so far.

One is related to the provision of medical services, while the second concerns hospital infrastructure development. The former agreement was signed prior to the adoption of the PPP regulatory framework, so in essence it does not fully correspond to the PPP standard structures, and the latter is still in the process of completion due to institutional issues, even though the relevant tendering process was completed long ago.

As for the energy sector, there are three projects related to the construction of district heating systems. Experience in all three projects shows there are effectively three sets of potential obstacles – institutional barriers on the part of the public partner, unharmonized cross-area legislation, and different expectations on risk distribution between the partners.

When it comes to institutional matters, the local authorities are usually very open and ready to pursue the project at its initial stage, but this motivation tends to wane once they realize the work and effort necessary to finalize the process. This is primarily caused by the lack of understanding and experience of public bodies and a complex and bureaucratic decision-making process. However, this barrier can be easily removed by improving the relevant bylaws and introducing more intensive education programmes, a number of which have already been initiated by several stakeholders.

The practice also shows that cross-area laws are still not harmonized with the PPP regulatory framework because energy projects usually include not only PPP rules but also laws related to communal utilities, electricity, and concessions. As an illustration, if a PPP project also involves the provision of a concession, these two procedures need to be undertaken simultaneously, which is time consuming and unnecessary, and theoretically may lead to different results in the selection process. The good news is that this issue has already been recognized by relevant lawmakers and certain concession laws have already been amended with the aim of easing the PPP process.

In addition to the institutional and regulatory issues, there are also misunderstandings of the nature of PPP by both sides of the public and private divide. While the public authorities expect that private partners should assume all the risks, the private sector expects risk-free investments, which in practice are almost impossible to achieve. These issues generally result from low awareness and narrow experience in the market, thus one can expect their mitigation as soon as a pool of successful domestic projects is established. Consequently, it can be argued that these ongoing energy projects are likely to open a way for various private initiatives, which are essential for the development and modernization of the country’s infrastructure.

One additional argument that greatly supports the PPP projects and puts additional pressure on local level government is the financing aspect and budget limitations. Local governments usually do not have infrastructure development budgets and therefore any significant investment needs to be carried out through either a loan (if there is a space for additional credit exposure) or through the PPP. Considering that the process of public borrowing is not simple and often limited, the PPP approach is a more efficient and less expensive way to meet the infrastructure development goals.

It may seem too early to conclude that PPP represents an efficient tool for implementing energy projects, primarily due to the lack of fully implemented and viable PPP projects in BiH.

Nevertheless, one cannot ignore the huge potential that exists in the field – particularly considering the expected economic downturn following the current pandemic. Combining public and private forces may prove to be the best way forward for expensive infrastructure projects, not only from the perspective of financial viability of the project itself, but also as a driving force for economic development, especially in the green energy sector that continues to be attractive.

Generally, the recently adopted PPP legislation at various levels in BiH does provide solid ground for implementing PPP projects in the energy sector, despite some ambiguities that can be successfully resolved during the process.

There is evidently strong support from the international financial institutions, but in order for PPP to be truly efficient, stakeholders such as local public authorities, potential private partners, and the local public, all need to engage more prominently to raise awareness of PPP and its benefits in countries’ development.