Iran looks up to Turkey in wind power sector 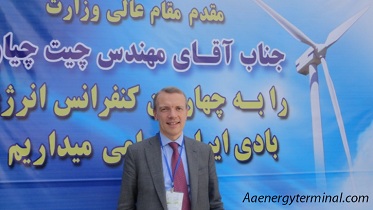 Turkey can serve as a leading example for wind power, being much more advanced in this sector than any country in its region, according to Giles Dickson (pictured), chief executive officer of WindEurope. In a statement from August 15, published by Anadolu Agency’s Energy News Terminal, he stressed the country reached more 5 GW in capacity and that its experiences can be useful for Iran, which has only 120 MW.

Hashem Oraee, president of Iranian Wind Energy Association (Irwea), said the domestic market has huge potential in both wind and solar energy. He underscored the vast experience that Turkish companies have and added they already have a presence in developing wind farms. “We discussed issues at length with the Turkish delegation at the Iran Wind Energy Association board meeting. The general view is that there is a lot of scope for cooperation between Turkish and Iranian companies in this area. In fact, we have put this issue on the agenda of the next board meeting and hope to come up with specific ways that our two associations can pave the way for the participation of Turkish companies in the development of wind industry in Iran. Indeed, here in Iran, we look at Turkey’s wind energy sector as a success story,” he explained.

Iran is heavily reliant, by around 85%, on fossil fuels, according to the International Energy Agency. However, the government in Tehran wants to develop its renewable energy potential in addition to its hydrocarbon resources. Iran wants to develop its clean energy sector in the post sanctions-era, and plans to have 1 GW or 2 GW by 2020, Dickson said and added that the country should work at reducing investment concerns in the country through incentives and guarantees.

Iran in the post-sanctions era has started to regulate its energy sector in preparation for attracting foreign investment. According to Renewable Energy Organization of Iran (SUNA), there is at least 5 GW in plans for construction in wind farms and photovoltaic capacity by 2018. Iran recently amended its laws and prolonged the guaranteed term for power purchase agreements from five years to 20 years. Moreover, feed-in tariffs have been increased, where photovoltaic plants with a capacity of more than 10 MW are eligible for IRR 5,600 (USD 0.15 at open market rate) per kWh.

Furthermore, a recently announced mechanism has been put in place to reflect inflation and currency exchange rate changes in favour of investors, the article said. Dickson explained concerns still remain for European financial institutions which fear a reprisal from the United States if they invest in the country.