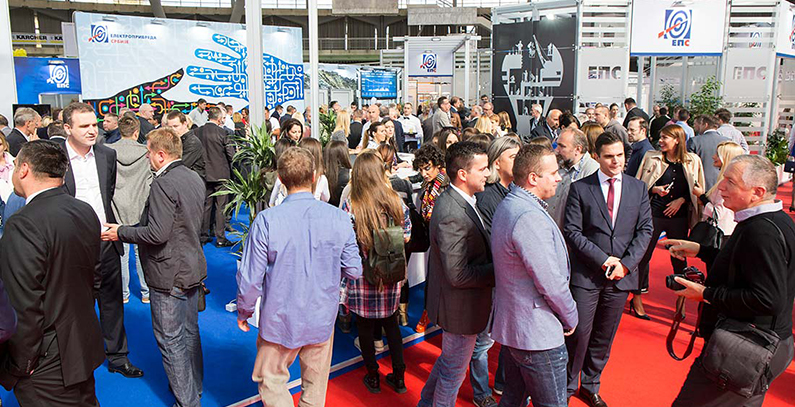 International fairs of energy, environment and urban future technologies have been opened today at the Belgrade Fair, featuring more than 150 domestic and foreign exhibitors. In addition to presenting new technologies, these fairs provide an opportunity to discuss the most relevant issues in the field of energy and environment at numerous accompanying conferences and debates.

The 13th International Energy Fair and 14th International Fair for Environmental Protection and Natural Resources – EcoFair, and the 6th iSEC – International Smart Technology Fair – Smart and Safe Cities, will be held from October 4 to 6, under the slogan “New Energy – Smart Cities”.

The Energy Fair is an annual and regional gathering of companies, corporations, enterprises, institutions and professionals in the sectors of electrical energy, coal, oil and gas, renewable energy sources, energy efficiency and mining. The EcoFair is focused on environmental protection systems and mechanisms, while the 6th iSEC is focused on high technologies used to upgrade urban services of “smart and safe cities”.

In Serbia, two thirds of electricity is generated in thermal power plants and one third in hydroelectric power plants. Milorad Grčić, Acting Director of Serbian power company, Elektroprivreda Srbije (EPS), said that one cannot underestimate the importance of hydropower.

He announced that hydro-aggregate A1 at hydropower plant Djerdap 1 on the Danube river will be put into operation next week. The hydro-aggregate has been finally repaired after two years despite some problems with the Russian partner who was in charge of it.

At a session dedicated to smart cities, EPS’s executive director for electricity trade Dragan Vlaisavljević said that the company has enough capacity to balance the variable performance of 500 MW wind farms that are expected to be completed or built in the next three years in Serbia.

Serbia could increase wind power capacity to 1,000 MW after 2021, if the Ministry of Energy decides so, but that raises the question whether Serbia would have sufficient capacity for balancing, Vlaisavljević adde

The use of renewable energy sources is important element of smart cities according to Miloš Banjac, Assistant Minister of Mining and Energy who also said that there is one solar heating project in Pančevo, and that one project with renewables has been developed  in Belgrade.

Banjac said that the energy-smart city is a highly energy-efficient and resource-efficient city that applies information and communication technologies. Resilience, energy efficiency, smart lighting and transport, as well as integrated and smart systems of district heating and cooling, are key characteristics of a smart city, too.

According to him, in 2010, 52 percent of the global population lived in the cities, and projections show that this percentage will rise to 66 percent by 2050. The population in the cities consume 70 percent of the energy in the world, Banjac said, adding that monitoring of energy consumption is key issue in further development.

Collected eco taxes should be invested in environment

Serbia is facing numerous challenges in the field of environment, including harmonization with the EU regulations and standards. One of the priorities of the newly established Ministry of Environmental Protection is to strengthen administrative capacities and to start financing projects from the Green Fund.

He said that  a decision on publishing a call for projects to be financed from the Green Fund, should be adopted soon. The selection of projects will help in programming funds for these projects in the budget for the next year.

Vesić reminded that the European Union Delegation to Serbia said that the Green Fund should be used better, as well as to ensure that funds intended for environment protection are used for this purpose.

In Serbia, companies pay different types of eco taxes, such as taxes for air pollution, carbon dioxide and other gases emission or for plastic bags, but the collected funds are not necessarily invested in environment.

Last year, EUR 50 to 60 million was collected from eco taxes, out of which EUR 17 to 18 million was allocated for the environment protection, Vesić said.

These funds do not go directly into the Green fund, but the funds are distributed within the budget. The Minister of Environmental Protection raised this issue, said Vesić.

Sinisa Mitrović from the Serbian Chamber of Commerce estimated that around EUR 100 million could be collected from eco taxes annually.

Some companies, however, do not send reports to SEPA whereas the tax obligation is calculated according to those reports.  In some cases, the courts have exempted them those obligations, declaring that the Agency is not in charge of this.

Vesić said that due to those difficulties the forced tax collection procedure has been introduced.